Romeo Langford is out for the season following wrist surgery 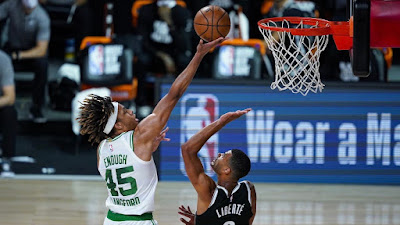 Romeo Langford's bizarre rookie year has come to an end after having surgery on his wrist.

The Celtics announced that Langford underwent successful surgery to repair the scapholunate ligament in his right wrist Tuesday morning. The team didn't share any sort of timeline on a potential return, only that his season is over.

He will miss the remainder of the 2019-20 NBA season. Further updates will be provided as appropriate.
— Boston Celtics (@celtics) September 22, 2020

It's unknown if this latest injury has anything to do with Langford tearing ligaments in his right wrist during the Celtics' final seeding game back in August. He did not end up missing any time during Boston's first-round series sweep of the Philadelphia 76ers.

Langford's short career has been hammered by injuries such as playing through a torn ligament in his right thumb during his freshman season at Indiana. Langford underwent surgery that caused him to sit out the 2019 summer league with the Celtics. He also had a strained groin and missed some time during the preseason in October, only to suffer a knee sprain shortly after.

During the regular season, Langford rolled his right ankle while playing for the Maine Red Claws in the G-League on Nov. 15. The rook re-injured the same ankle returning to action for the Red Claws on Dec. 1.

Langford suffered another injury in Game 2 of the Eastern Conference Finals against the Heat, as the Celtics guard had to leave the game after playing 81 seconds in the first quarter due to a right adductor strain. He was ruled out for the remainder of that game and did no suit up for Game 3.

Langford, who the Celtics selected with the 14th-overall pick in the 2019 NBA Draft, averaged 2.5 points in 11.6 minutes per contest in 32 games played during the regular season. He's made appearances in seven of the team's 14 playoff games up to this point.