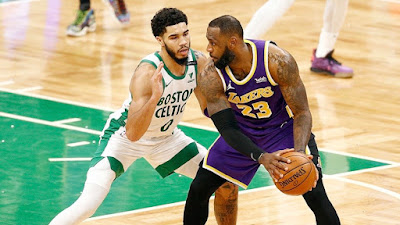 Another chapter was written in the historic rivalry between the Celtics and Lakers Saturday night, in a rare primetime nationally televised bout at TD Garden.
Jayson Tatum scored a game-high 30 points on 12-of-18 shooting (2-3 from 3) and grabbed nine rebounds, while Jaylen Brown finished with 28 points (13-19 from the field, 2-4 from behind the arc), but it wasn't enough for the Celtics to hold off the Lakers in a tough 96-95 home loss.
Boston still had one last breath of life despite being down seven with 39 seconds left in the fourth, following a LeBron James turnover that led to a pair of made free throws by Kemba Walker and Tatum hitting back-to-back buckets to get the Celtics within one.
Walker deflected Anthony Davis' shot from near the top of the key, setting up the final play for Boston on the other end without calling a timeout. The Celtics All-Star guard missed a 13-foot jumper and Daniel Theis couldn't get the put back to fall as time expired, snapping Los Angeles' two game skid in the process.
Theis scored 14 points and Robert Williams III had 10 points off the bench, while each grabbed seven boards respectively for the Celtics, who played the last 10:28 without guard Marcus Smart. The veteran guard was helped off the court after a collision with Montrezl Harrell underneath the Lakers' basket. Harrell came down on Smart's foot while grabbing a rebound and team officials called the injury a left calf strain.
Davis recorded a double-double of 27 points, 14 rebounds and James netted 21 for the Lakers, who are now 15-6 on the season. Harrell added 16 points and Dennis Schroder chipped in 12 with seven assists.
The Celtics held the Lakers scoreless the final 1:40 after withstanding a 11-4 run that broke an 85-85 tie. Walker had a poor shooting night hitting only 1-11 of his attempts (0-5 from 3) prior to the last shot that could of been more than likely the game-winner for Boston.

Boston trailed the Lakers by three at halftime before outscoring the reigning champs 29-19 in the third period to take a 78-71 advantage into the final frame.
While the tandem of Theis and R. Williams gave the Celtics a better look on defense, especially on Davis (scored nine points in the second half) and limiting the Lakers overall to 44% shooting from the field to not reach 100 points for only the second time this season, it was the depth of Los Angeles' second unit outscoring Boston's bench 35-15 that made the difference down the stretch.
The Celtics, who have dropped five of their last seven, will have a couple of days off before they head out on a five-game west coast trip beginning on Tuesday against the Golden State Warriors. TNT will have the tip-off at 10 pm EST.
Game Notes:
Boston shot 48.8% from the floor and assisted 24 times on 40 made baskets, while forcing 15 turnovers, which included 10 steals. The Celtics (6-21) and Lakers (9-31) both finished with 29% shooting from 3, while each grabbed 50 rebounds respectively.