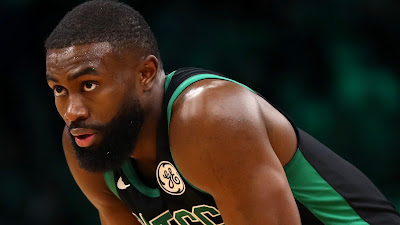 Celtics president of basketball operations Danny Ainge gave an update on Jaylen Brown's left knee soreness during his weekly appearance on Boston's 98.5 Sports Hub Thursday morning.
Brown missed two straight games prior to his return in the team's 122-108 loss to the Utah Jazz this week, with the injury that apparently has been lingering for a little while.

"We're concerned. Jaylen has tendonitis in his [left] knee," Ainge admitted on the "Toucher & Rich" program. "We're concerned about it. We're doing everything we can. Giving him the two days rest isn't going to cure it, it's just going to lighten the load."

Brown told reporters Tuesday night that he had been dealing with his left knee being sore for a "couple of weeks now" and a flair up did occur in the third quarter against the Jazz, but he felt better overall.
Ainge recalled his own on and off bouts with tendonitis throughout his 14-year NBA career and explained the importance of load-management.

"We hear a lot about load-management, and load-management prevents tendinopathy," Ainge explained. "It's interesting, in my career when I was playing 37, 36 minutes a game in my '20s, that part of my career, I had the tendinitis pretty consistently. And once I started playing 22, 24 minutes a game later in my career in my '30s, I didn't have it anymore. So we're keeping an eye on it.
"It's a very common thing among NBA players, tendinitis in that patella tendon," Ainge added. "We'll just keep keep tabs on it the best we can and try to get the best version of Jaylen that we can have."

When asked about having prior knowledge of Brown's knee, Ainge confirmed that he's known about the Celtics' wing's tendonitis for "the last two weeks"

"I don't know how serious it is," Ainge said. "But I have been given no given no reason to be concerned about anything long term. Like I said, I had it all the time and you can just play with it. You usually have to get it warmed up pretty good and you can function, but yeah I don't think there's any long-term concerns at all."

The Celtics at 12-11 look to bounce back from a 2-3 west coast road trip when they face the Toronto Raptors (12-13) tonight and the Detroit Pistons (6-18) on Friday as part of their back-to-back mini homestand at TD Garden.