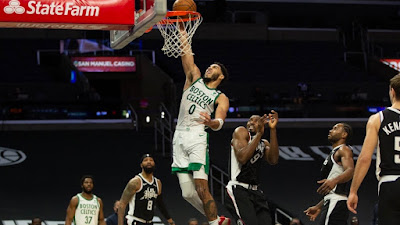 The Celtics took full advantage of the Los Angeles Clippers playing without superstar Paul George, as they held on to a 119-115 victory at the Staples Center Friday night.
Jayson Tatum hit 5-of-10 from beyond the arc on his way to a game-high 34 points to lead Boston, who was without Jaylen Brown (left knee soreness) and Marcus Smart (calf strain).

"This was a good win, coming off a loss, down a few guys," Tatum said in his Zoom press conference.

Kemba Walker finished with a season-high 24 points after sitting out in the team's 116-111 loss to the Kings and Carsen Edwards scored 16 points on 5-of-8 shooting, including three 3's in 30 minutes off the bench. Tristan Thompson and Grant Williams each chipped in 11 points respectively for the now 12-9 Celtics.
Boston was down double-digits for most of the first half, before going off for eight 3-pointers by five different players to outscore the Clippers 38-20 in the third period.
Kawhi Leonard led Los Angeles with 28 points, 11 rebounds and five assists, but went 0-for-5 from behind the arc. Lou Williams had 18 points six assists, while Nicolas Batum scored 16. Luke Kennard and Marcus Morris Sr. each netted 13 apiece for the Clippers who are 17-7 on the season.
The Celtics capped a 23-6 run in the third quarter with back-to-back 3-pointers from G. Williams for the team's first lead of the game, as they took a 89-82 advantage into the final frame.
The Clippers, down nine to start the fourth, tied the game three times until Leonard hit a go-ahead turnaround jumper with 2:46 left to put Los Angeles up 108-106.
Boston hit five straight free throws to take a three-point lead. Lou Williams followed it up with a made free throw and a 3-ball to put the Clippers back up one with 46.1 seconds remaining, but a Leonard turnover and a Walker mid-range shot put the Celtics back on top for good.

"That was definitely a confidence-builder," Walker said in his post-game presser. "We started off slow, but we stuck together throughout the whole game. Energy was great, communication was great, our togetherness was on a whole other level."

Leonard missed two more opportunities in the final 30 seconds and the Clippers had to foul, while the Celtics hit six straight from the charity stripe to hand Los Angeles two consecutive losses and only their third defeat at home.

"Our margin is such that we're just going to play a lot of close games," Celtics coach Brad Stevens said. "We got to get used to doing our best in those moments."

Boston is 2-1 on their current five-game west coast road trip, as they'll roll into Phoenix to face the Suns in a matinée on Super Bowl Sunday. NBATV will have the tip-off at 2 pm EST.
Game Notes:
The Clippers shot 51.9% from the field and 43.8% from deep and out-rebounded the Celtics 55-39, while Boston hit 47.8% of their attempts from the floor and 42.1% from 3, plus forced 16 turnovers. Both teams went 17-of-21 from the free throw line respectively.
Rookie Payton Pritchard made his return to the C's lineup after missing six straight games with a MCL sprain, finished with eight points, two rebounds and two assists in 19 minutes off the bench