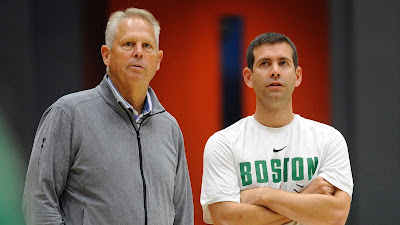 Danny Ainge made his weekly appearance on 98.5 The Sports Hub's "Toucher and Rich" program Thursday morning to discuss the Celtics' 11-9 record and of course, the team's $28.5 million trade exception.
With rosters dealing with COVID-19 health protocols and injuries this season, Ainge might want to consider making a move or two before the March 25 trade deadline.
The Celtics president of basketball operations was asked when would be the right moment to pull off a potential trade in an unusual season like this one.

"That's a good question," said Ainge. "Yeah, we are doing research on it. We have been all year, and we'll continue all the way up until the trade deadline, which is the end of March. I think that the sweet spot most likely is latter March. But we'd do it right now if we had a really good deal.

"The challenge is that deals that you could do to incrementally change your team might be able to be done shortly here within the next week or two," added Ainge, "but are you passing up a chance that would be even better down the road? And that's what we have to try to identify."

While it has only been 20 games into the young 2020-21 campaign and with Kemba Walker on a minutes restriction, plus Marcus Smart (calf sprain) and rookie Payton Pritchard (MCL sprain) also out, Ainge was also asked what is the biggest need for the Celtics currently, after dropping six of their last nine.

"I would say maybe shooting with size," he replied.
"There are a lot of different ways that you can win in this league," said Ainge explained why he felt that way, "but I would say that shooting, we could use shooting, we could use passing, but you always need defense. Our team is built on defense. We've been winning with defense over the last few years. I know we haven't won a championship, but we need defense. It's hard to just find a shooter that can't guard anybody, and expect that person to just come in and make a major change on our team."

Boston, who's on a five-game west coast road trip, are 1-1 after a 116-111 loss to the Sacramento Kings Wednesday night. Though Ainge has stressed about being patient in the pass when it comes to waiting on the right deal, he may explore using the trade exception to add some depth sooner rather than later, despite it expiring well into the offseason.
Ainge also mentioned how the need for a certain type of player he may be seeking won't be the easiest to find since many teams are more than likely searching for the same thing.

"We're looking for complete players obviously," said Ainge, "but I think that shooting at the big position is something that we haven't had."

The Celtics continue their western swing on Friday night against the 16-6 Los Angeles Clippers.