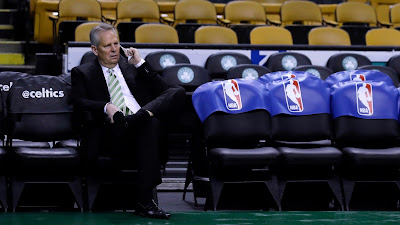 The Celtics are one of the few teams with multiple All-Stars when it comes to Jaylen Brown and Jayson Tatum, but following their 127-112 blowout loss to the Atlanta Hawks Wednesday, they now find themselves at the bottom of the Atlantic Division and currently out of the playoff picture.
After Celtics TV play-by-play announcer Mike Gorman ripped the young duo for their individual accolades versus overall contributions for the greater good of the team, president of basketball operations; Danny Ainge is not ready to serve the blame pie to his rising star tandem just yet.

"I wish I had answers for you. I don't," Ainge said during his weekly appearance on 98.5 The Sports Hub's "Toucher and Rich" Thursday morning. "I do believe in my players. I like them all individually. I think they have good futures. I just think right now our team is in a major funk."

Boston has dropped eight of their last 11, including going 0-3 on their mini road trip, where they blew a 24-point lead to the Pelicans in an overtime loss and fell to the Mavericks after overcoming a 13-point deficit in the final minute only to have Luka Doncic hit a game-winning 3-pointer. The Celtics followed that heartbreaking defeat in Dallas with a stinker in Atlanta on a second night of a back-to-back.
Despite Brown's 17 points as a team-high, Tatum was held to only 13 points and the Celtics' two leading scorers combined for 10-of-36 from the field -- including shooting 1-of-14 from deep.

"Here's what the biggest thing about Jaylen and Jayson is," Ainge said. "They've been shielded before because they've had other really good players, veterans around them as they developed -- and went to three out of four Eastern Conference [finals].
"Now it's on them. Now they're the stars. And they've got the big contracts. And they got the All-Star nods. So the microscope is on them."

Kemba Walker was that veteran All-Star that took the pressure off of Brown and Tatum a season ago, but this year the point guard is still coming along slowly from a knee procedure that has limited him to only 16 games played so far.
While still not playing back-to-back games and remains on a minute restriction, Walker's numbers are average at best, scoring 17.3 points on 37.5% from the floor.
Still, Ainge, who has the full support of Celtics' Governor Wyc Grousbeck, is placing blame on himself and not on his coach Brad Stevens, which he defended for a second straight week.

"This is a me problem," Ainge said. "I'm saying that I love my two young guys, they're not perfect, and they're learning, and this adversity is part of their growth and development -- not intentionally, it's just the nature of the beast."

Though Ainge is not making excuses, he's also not going to make a change just for the sake of making a move, "but I am looking to do something that will make a difference on our team."

"We're playing terribly," he said. "We don't have a good enough team -- in my opinion."

The Celtics at 15-17, will look to finish the first half of the season on a strong note, when they host the Pacers on Friday night, followed by the Wizards, Clippers and Raptors leading into the All-Star break.

"I think they both hold themselves accountable," Ainge said of Brown and Tatum. "You're talking about two hardworking kids that are trying to get better. And this is a very frustrating time for them."