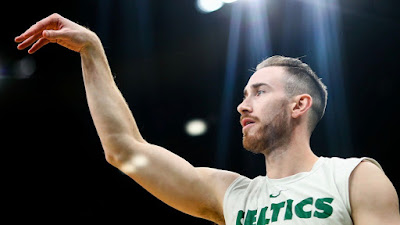 Free agent forward Gordon Hayward has reached an agreement to sign a four-year, $120 million deal with the Charlotte Hornets, according to Adrian Wojnarowski.
Hayward's agent Mark Bartelstein of Priority Sports informed ESPN on Saturday afternoon of the reported signing.

Hayward declined a player option worth $34.2 million with the Celtics on Thursday, which would have been his fourth and final year of a $128 million contract signed back in 2017.
The former All-Star is coming off his best season in Boston, averaging 17.5 points, 6.7 rebounds and 4.1 assists, while shooting 50% from the field -- including 38% from 3 -- in 52 games played.
Hayward, 30, had three injury plagued years in Boston, suffering a gruesome leg injury five minutes into his Celtics career and an up and down 2018-19 season -- the healthiest of the three, but mostly coming off the bench, before having a resurgence during the 2019-20 campaign.
Following the NBA being on hiatus, Hayward picked up where he left off prior to the stoppage in the eight seeding games and playing near All-Star form. But he missed all but five games during the Celtics postseason run to Game 6 of the Eastern Conference Finals and struggled, while rehabbing from yet another ankle injury.
After missing a total of just 42 games during his first sevens years in Utah, Hayward missed 142 games (including playoffs), while averaging 13.9 points, 5.4 rebounds and 3.6 assists with the Celtics.
The Hornets have been after Hayward since he signed an offer sheet as a restricted free agent in 2014, before the Jazz matched it. They'll have to shred salary to make room for this new contract and it looks like Nicholas Batum's $27 million expiring deal is an obvious move through a buyout to spread out the cap hit over the next three seasons.
Per NBA insider Keith Smith, Hayward's new deal could possibly turn into a sign-and-trade for the Celtics, if the Hornets decide to move at least $7.5 million in salary if they don't want to have $9 million in dead money paying Batum if he's waived.

Charlotte has to do ONE of these things to give Gordon Hayward a 4-year/$120M deal. Not all of them. https://t.co/zyWun2a4mx