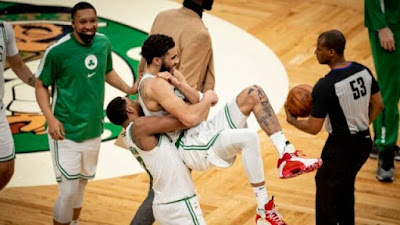 The cliché "it's not how you start, but how you finish" phrase sums up the Celtics this past week perfectly after it began with them getting blown out by the Charlotte Hornets and it ended with Jayson Tatum making history against the San Antonio Spurs.
While the Celtics finished 2-2 over the last four games, what easily stands out the most is their 32-point rally overtime win over the Spurs, which was the third largest comeback in NBA history.
With eight games remaining in the regular season, the Celtics will need all the wins they can get to stay a float in the tight East playoff race to avoid the Play-In Tournament, as they remain in sixth with a 34-30 record.
Stud of the Week: Jayson Tatum -
As if there was any question who would take the crown this week, despite sitting out with an ankle injury (more likely a much needed night off) against the Oklahoma City Thunder, Tatum got off to a slow start in the first meeting against the Hornets with 6-of-16 shooting for 19 points to an historic 60-point performance against the Spurs.
Tatum became just the second player in franchise history to score 60; tying none other than Larry Bird, who held the record since 1985. The Celtics All-Star hit 20-of-37 (54.1%) from the field and 5-of-7 (71.4%) from deep, while going 15-of-17 on free throw attempts. Not to mention he grabbed eight rebounds and five assists on the night.
With Kemba Walker out with an oblique strain and Jaylen Brown struggling offensively (5-of-24 shooting, 4-of-12 from 3), Tatum not only took on the load in the first half with 24 points, he went off for 21 in the fourth quarter and 10 more in overtime to complete the largest comeback of the year.
The win over San Antonio was the second straight game that Tatum scored at least 35 points, as he finished the week with averages of 38 points (47.9% shooting, 43.8% on 3's), 9 rebounds and 5 assists per contest.
Game of the Week: Spurs @ Celtics -
After a somewhat impressive 120-111 win versus the Hornets at home to avenge a blowout loss in Charlotte three days prior, the Celtics were down 77-48 at halftime before they pulled off a 32-point comeback overtime win against the San Antonio Spurs at TD Garden -- the largest in franchise history. Outside of Tatum's 60 point explosion, Brown, who finished with 17 points, hit a dagger corner 3 with 16.7 seconds left in OT to give the C's the lead for good.
Rookie Aaron Nesmith took full advantage of his increased playing time, especially in the crunch as he put up 16 points on 7-of-9 shooting, 2-of-3 from 3-point range and six rebounds in 30 minutes off the bench.
Boston went 13-of-20 from behind the arc in the second half and overtime, going 33-of-59 overall from the floor to nearly double the 48 points they put up in the first half -- outscoring San Antonio 95-63 for clearly the best win of the season.

"I think the best part was obviously coming back and winning and just seeing everybody contribute," said Tatum in his postgame comments. "That just kind of shows the growth of our team — to see everybody contributing when we're down 30 points and just figuring out a way to win the game.

Dud of the Week: Evan Fournier -
The veteran guard that was suppose to provide an offensive boost has continued to have trouble finding his way when it comes Evan Fournier. With the absence of Walker and Marcus Smart (one-game suspension), Fournier started three out of the four games this past week and his shot is still not where it was in the two outings prior to a bout with COVID-19.
Though Fournier's best game was against the Spurs; scoring eight points on 3-of-6 from the field and 2-of-4 on 3'sin 21 minutes as a starter, he finished the week with averages of  5.2 points (23% shooting, 18% in 3's), 4 rebounds and 1 assist per game.
Celtics president of basketball operations Danny Ainge spoke about Fournier and how he believed that the former Magic guard is still feeling effects of the coronavirus, but had confidence in an offensive turnaround sooner rather than later.

"Evan's not himself right now," Ainge said of Fournier this past week on 98.5 The Sports Hub. "We need him to be as good a team as we can be."

Stinker of the Week: Thunder @ Celtics -
Despite losing in a 125-104 blowout to the Hornets to start the week in an end to end whopping, the Celtics let an underperforming Thunder team -- who were riding a 14-game losing streak come into the Garden to beat them 119-114 in the most embarrassing defeat of the season.
Granted the Celtics were without Walker, Tatum and Robert Williams, Jaylen Brown netted 39 points and rookie Payton Pritchard added a career-high 28 points off the bench. Smart added 14 points but it took 17 shots to get there and Fournier chipped in 11 on 4-of-14 from the floor.
Meanwhile, the Thunder shot 48.1% from the field and 13-of-30 from behind the arc, as they're largest lead was 11 behind Lou Dort' 24 points and Darius Bazley with 21 to go 21-41 on the season; snapping a franchise record of 14 consecutive losses.

"(Expletive), we gotta play with more of a sense of urgency," Jaylen Brown said during his postgame presser. "Tonight, I feel like we didn't have the sense of urgency that we needed across the board, and a team that has some young, talented players came ready to play, and we got beat."

What to look for This Week: vs Trail Blazers (5/2), @Magic (5/5), @Bulls (5/7) -
Will the Celtics finally be at full health for the final stretch?
It's pretty simple when it comes to the Celtics finishing the regular season off strong and its health. Will Walker's oblique strain be a set back or is it just a precaution, plus will Brown or Tatum be able to have a day off for rest at some point in the final eight games? With the sudden emergence of rookie Nesmith, more reps for both Fournier and Jabari Parker, coach Brad Stevens should have sufficient depth off the bench to give any of the starters a breather.
Boston holds victories over each and every team they'll face this week in Portland, Orlando and Chicago before the last game of their current homestand and a brief road trip with at least two days off in between.
The Celtics are at the moment are 1.5 games behind the the New York Knicks for the fourth seed before the two teams face each other on the last day of the regular season. It should be very interesting how the playoff race in the Eastern Conference shapes out between now and then.