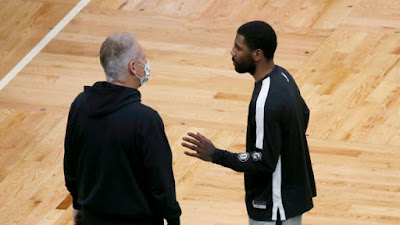 With the Celtics trailing the Brooklyn Nets 0-2 in their best-of-7 first round matchup, Jayson Tatum (eye) and Kemba Walker (bone bruise) are both expected to play Friday night in Game 3.
Following Boston's blowout loss in Game 2, the series now shifts to the TD Garden -- where All-Star and former Celtic Kyrie Irving hasn't played in front of fans since leaving as a free agent in 2019.
The Nets guard's response when asked about his return to the Garden with actual fans being in attendance, has been the subject of conversations nationwide over the past few days.

"It's not my first time being an opponent in Boston," Irving said following Game 2 Tuesday night. "So I'm just looking forward to competing with my teammates and hopefully we can just keep it strictly basketball, there's no belligerence or any racism going on -- subtle racism and people yelling shit from the crowd. But even if it is, that's just the nature of the game, and we're just going to focus on what we can control."

"I'm not the only one who could attest to this," Irving added when ESPN's Rachel Nichols asked if he had experienced racism in Boston before. "It is what it is."

Danny Ainge was asked during his weekly radio interview on Thursday morning, if he fears Irving's comments would have a bad influence when it comes to a certain perception of the city of Boston and playing for the Celtics from NBA players' and potential free agents' point of view.

"I think that everybody's influencing somebody," Ainge explained on 98.5 The Sports Hub's Toucher & Rich. "So yeah, I think that there's – my fear is that could possibly happen. But I think that our players, and players that have played here in the past, all have their experiences to share, and that's just one player."
"Quite honestly I've never heard any of it," Ainge added. "I’m not saying the city of Boston, I'm saying the downtown or the TD Garden…I think our fans are very respectful."

While acknowledging there have been multiple incidents that the Celtics have dealt with over the past few years, coach Brad Stevens also denied ever being approached by Irving or anyone one else about accusations of racism, but also realizes that those could have been kept private.

"I certainly take any comments like that very seriously," Stevens said Wednesday on 98.5's Zolak & Bertrand. "I don't know what context [Irving] was discussing there. But I know that the Garden, I know that the Celtics, I know that the NBA, is very alert to making sure that our fans don't cross the line. I think that's really important. People shouldn't ever feel like they're being discriminated against. I think everybody is dialed into that.
"That's happened maybe once or twice since I've been here, and it was dealt with immediately. But maybe it's happened and guys haven't talked about it. Certainly Kyrie has never mentioned anything to me about it, but that doesn't mean it didn't happen, and I think those things should always be taken very seriously."

When it comes to the Celtics early commitment to diversity in the 1950's, Ainge agrees while that played a major factor for the franchise, it's something that isn't necessarily mentioned in conversations when referencing to the history of Boston sports.

"I mean first Black player, first Black coach, first Black starting five," Ainge noted. "I think that our history is pretty good when it comes to that as far as the Boston Celtics are concerned."

The Celtics host the Nets tonight in front a 25% crowd at the Garden, while Sunday's Game 4 is expected to increase to "near full capacity" for Irving to finally play in front of.