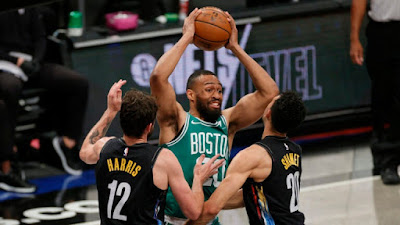 It was as ugly as a loss can get in the playoffs, as the Celtics now trail 0-2 in this first round best-of-7 series after falling to the Brooklyn Nets 130-108 in Game 2 Tuesday night at the Barclays Center.
All- Star Jayson Tatum finished with only nine points on 3-of-12 shooting in 21 minutes before leaving the game in the third quarter after getting poked in the right eye and he didn't return.
Marcus Smart led the Celtics with 19 points (5-of-8 from 3), six assists, while Kemba Walker scored 17 points and handed out seven assists. Evan Fournier added 16 points and Tristan Thompson notched a double-double of 15 points, 11 rebounds.

"We've got to be way better," coach Brad Stevens said about the Celtics' defensive problems. "They exposed that because they were really good, but I was disappointed in how we played versus the other night."

The Celtics once again had trouble scoring and couldn't stop the Nets after holding them to just 16 first quarter points in Saturday's Game 1 loss, only to give up 40 this time around and it was all downhill from there.
Joe Harris scored 16 of his 25 in the first 12 minutes of the game -- tying a franchise playoff record with seven 3's made on the night for the league's leading 3-point shooter percentage wise (47.5%).
Kevin Durant led the Nets trio with 26 points on 8-of-12 from the field and James Harden netted 20 to go along with seven assists, while Kyrie Irving chipped in 15 points to help take a 2-0 series lead.
Boston trail 40-26 after one and two quick 3's from Harden made it a 20-point deficit that the Celtics never could recover from.
The Nets led 71-47 at halftime and it only got worse in the third quarter once Tatum made his way to the locker room after getting poked in the eye by Durant and was ruled out for the rest of the game.

"He got scratched pretty good," said Stevens. "It looks pretty red. It looks pretty swollen to me. I don't know what that means. I don’t know the exact diagnosis is, but obviously he's uncomfortable right now."

With Tatum gone, Boston's deficit ballooned to 94-61 with 5:51 left in the third, the largest of the night and Stevens emptied his bench once the fourth quarter started.
Walker spoke about watching film and find opportunities that they missed as the series shifts to Boston, where there'll be an increased crowd capacity at TD Garden.

"I know I missed a lot of passes myself that I could've made personally that I would definitely like to be better at," he said in his postgame presser. "So we've just got to be better."

The Celtics will have two days off before returning home for Game 3, which is scheduled for an 8:30 PM EST tip-off on ABC.