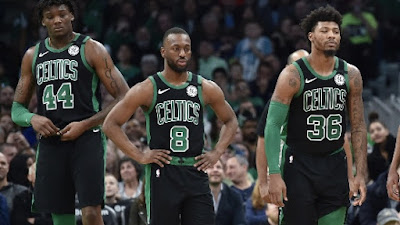 The Celtics chose to rest six players in Sunday's season finale against the New York Knicks, but don't expect coach Brad Stevens to be that shorthanded again come the "Play-In Tournament."
While Boston will host the Washington Wizards in the No. 7 vs. No. 8 Eastern Conference play-in game, Stevens gave an update on the team's health ahead of Tuesday's matchup at TD Garden.

"Everybody practiced, so that's encouraging," Stevens said to reporters Monday afternoon. "So, the hope is that we'll have everybody available. I think Rob (Williams) will still be a game-time decision. But (Marcus) Smart looked great. Kemba (Walker) was good. Tristan (Thompson) is still dealing with some soreness, but he looks like he'll be good. We should definitely have more (players available) than (Sunday)."

Despite Washington's All-Star Bradley Beal battling a hamstring injury of his own and the Celtics being without Jaylen Brown (wrist surgery), Boston will need Marcus Smart (calf) and his defense and Kemba Walker's offense, especially as of late, to combat the Wizards' dynamic backcourt -- which includes Russell Westbrook's triple-double average and the NBA's second leading scorer in Beal.
Walker, who hasn't played since recording a season-high 36 points against the Miami Heat a week ago, says he's not concerned with his layoff.

"I thought about (rest cooling me down)," Walker said during his Zoom call with the media after practice. "It' s kind of always a fine line you know. I'm still putting my work in, still putting shots up, trying to stay in rhythm as best as I can, but the most important thing is for me to feel as good as possible and I do. I feel really good right now."

Smart also hasn't played in seven days after colliding with the Heat's Duncan Robinson in the same game. He was diagnosed with a left calf contusion, which was not the same leg that he suffered a calf strain back in January that forced him to miss 18 consecutive games.

"I'm feeling great," Smart said told reporters in his presser. "The time off, with the rest, definitely helped. The training staff has done a good job to keep me in shape with this amount of time off and stay ready."

As for veteran Tristan Thompson who had a left pectoral strain, seems ready to go, but Robert Williams' lingering turf toe has kept him out for five of the last six games and his status is still a game-time decision against the Wizards.
A victory for the Celtics over the Wizards tonight would lock up the No. 7 seed, as the Brooklyn Nets will be waiting for them in the first round of the playoffs. A loss to the Wizards would mean the C's have another shot to make it to the postseason by playing the winner of the Charlotte Hornets (9) versus Indiana Pacers (10) play-in game. In order for Boston to secure the No. 8 seed, they need to win that matchup. If they lose both games, then the Celtics would miss the playoffs (first time since 2013-14) entirely and enter the draft lottery.
Joel Pavón
Follow @Joe1_CSP