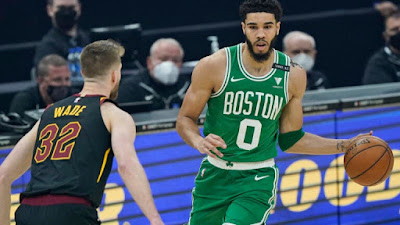 The Celtics are officially 'play-in' bound after losing to the Cleveland Cavaliers 102-94 at Rocket Mortgage Fieldhouse Wednesday night for their fourth straight loss.
Already playing without Jaylen Brown, who had season-ending surgery to repair a torn ligament in his left wrist and Robert Williams (turf toe), the Celtics also added starters Kemba Walker and Marcus Smart to their injury report prior to tip-off.
While they mathematically had a chance to grab the sixth seed, despite losing back-to-back games to the Miami Heat, the loss to the Cavs (22-48) means the Celtics have locked up a play-in spot (7-10 seed) with two left to play in the regular season.
Jayson Tatum scored 29 points, but it took him 26 shots to get there, while grabbing eight rebounds.

"This is tough," said Tatum during his postgame presser. "Especially losing games like this."

Rookie Payton Pritchard and Evan Fournier each finished with 15 points apiece, as the Celtics shot only 35.6% from the field.
Kevin Love netted a game-high 30 points (6-of-9 from deep) and 14 rebounds, while Collin Sexton added 28 points on 7-of-15 shooting to lead the Cavaliers to snap an 11-game skid.
Both teams had an abysmal first quarter, as Cleveland grabbed a 22-11 lead and Boston scored six unanswered points to trail by five after one.
It didn't get much better in the second period as the Celtics had 39 points at the break before having a 30-point third quarter to take a 69-67 advantage into the final frame.
The Cavaliers used a 22-7 run after two straight made 3's by Love and Sexton to grab a 89-76 lead for good with 4:24 left to play. The closest the Celtics would get was nine, as they shot 7-of-25 in the fourth and the Cavs went 12-of-17 from the field to take the season series 2-1.
At 35-35, the Celtics are back at .500 since April 7 and more than likely will face either the Charlotte Hornets (33-36) or Indiana Pacers (33-36) as the No. 7 seed depending how the next few days play out.
They'll travel to Minnesota and take on the Timberwolves (22-47) Saturday night at 8 PM EST.