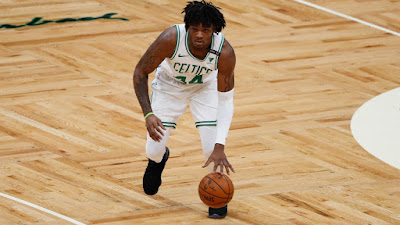 The Celtics dropped another crucial game Friday night in a 22-point blowout loss to the Chicago Bulls and further complicated their playoff positioning from sixth to seventh in a tight race in the Eastern Conference.
Despite Kemba Walker finishing with a season-high 33 points, Boston was without All-Star Jaylen Brown and Robert Williams, plus Jayson Tatum struggled offensively going 3-of-15 from the field -- scoring only nine points.
While Brown (ankle sprain) is expected to return on Sunday against the Miami Heat, who are ahead of the Celtics in the standings by one game, Williams' availability is still unknown for the upcoming week.

It's not ideal," Stevens told reporters of Williams' injury and status. "Turf toe's an interesting injury, right? For anybody who's ever had it, it's a nuisance. It's a difficult thing to deal with. He's meeting with specialists and figuring the best method of attack. He almost sat out Wednesday. It's one of those things that you can play through, but the pain is pretty significant and I think that each time he plays, it's gonna feel more and more."

Without Williams in the rotation against the Bulls, Tristan Thompson started in his place, scoring eight points and grabbing 10 rebounds in 27 minutes of action. Luke Kornet lasted only 10 minutes off the bench chipping in four points and two rebounds, before Stevens tried having Tacko Fall come in during the second half. After six minutes of Fall, Grant Williams was called upon in a small-ball lineup -- proving to be the most effective with nine points and two rebounds.

"Obviously, I think they played really well and we did not shoot the ball well, and it kind of went from there," said Stevens in his postgame comments. "But they are a tough matchup for us. Their size and length is an issue."

Old friend and now Bulls starter Daniel Theis posted nine points, eight rebounds and a steal in 29 minutes. The former Celtic center has averaged 10 points and six rebounds since being traded to Chicago.
With five games remaining, the Celtics currently at 35-32 (seventh place) are looking to avoid the "Play-In Tournament." They'll host the Miami Heat (36-31), who are a full game ahead of Boston in the standings (sixth), on Sunday and again Tuesday night at TD Garden.
Whether the roster is healthy or not, their playoff destiny is still up in the air and Stevens is going to just roll with whoever is available.

"I believe in our guys," Stevens said. "And we're just going to have to find the right fit while Robert's out, depending on our matchup."