Jaylen Brown's wrist was an ongoing concern for several weeks 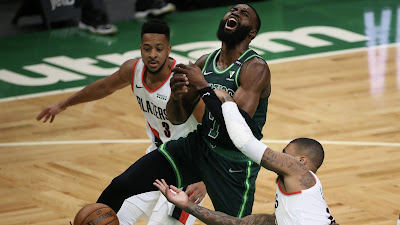 The Celtics got hit with a tough blow Monday night when they announced that Jaylen Brown would need season-ending surgery to repair a torn scapholunate ligament in his left wrist.
Coach Brad Stevens addressed the injury for the first time in the past 24 hours and gave an update prior to the team's second matchup against the Miami Heat.
The Celtics' All-Star was dealing with soreness in his wrist for weeks, but the team didn't know the extent of the damage until Brown complained of increase pain over the past seven days.
While Stevens says no one can pinpoint when the injury occurred, Brown was seen grabbing his wrist after a fall in a win against the Los Angeles Lakers back on April 15, then may have re-injured the same wrist again in the Celtics' loss to the Oklahoma City Thunder twelve days later -- saying he was fine following both games.

"Even asking Jaylen, or having that conversation, he wasn't 100% sure exactly when it first started," Stevens said Tuesday in his pregame presser. "I've seen the videos and the different times where it might have (happened). It was sore at times, but never a point where he didn't think about it from a playing standpoint.

"(It was) a little bit more sore after he came in and shot, and so he went for imaging on Friday, and that’s when he found out," said the Celtics coach. "So the 24, 48, 70 hours after that, was just gathering as much information as possible for both him, our team, and everything else before we officially announced it.
"So, first time that I had heard of it, or even heard of a wrist injury that was bothering him to the point of getting it scanned, was Friday. I saw him grab for it just like everybody else did, and he played through a lot, right? He had the ankle, he had the shoulder, he had the knee tendinitis this year. And, again, it's too bad, because he's having such a good year, and he put so much work into it, and everybody wants to be playing at this time of the year."

Brown was already nursing an ankle injury, following a collision with teammates Jayson Tatum during the final minute of the Celtics' loss at TD Garden to the Portland Trail Blazers over a week ago that aggravated an ongoing right ankle sprain and also caused another flare-up in his left wrist.
According to Stevens, the training and medical staff decided to scan Brown's wrist once the pain got worse.

"Well they have a discussion after every game, after every practice. I’m not in every discussion with our medical staff and the players," said Stevens. "Obviously, they get treated right when they walk in the facility, head to toe. So I don’t know if that ever came up in a discussion with Jaylen with one of our physiotherapists. But if it did, it wasn't to the point that they deemed that it would need a scan.
"When he did describe it as increasingly sore in the last couple of days, that's when they decided to get the scan. I think that, first and foremost, the training staff we have and the medical staff we have does a terrific job and they're on it and they keep that open line of communication with the players. And I think Jaylen and everybody else would second that. This is a really good group we have here. But we're glad that they got it when they did. It was good information, obviously, and we needed to react accordingly. Jaylen's already left Boston and will have the procedure later this week."

With the Celtics still battling for playoff positioning, Stevens says replacing Brown will not be an easy task and most likely be by committee from here on out.

"Well, I think the biggest thing is, scoring is one thing, but the physical strength and physicality of Jaylen on the defensive end and his ability to drive through people is different," said Stevens. "So you're not going to necessarily have that ability from a scoring standpoint, but you certainly had different ways and different people that you could go to. Nobody is going to replace him by himself.
"On the other end of the court, what it does is it basically has forced, in the last few games, at least, Jayson (Tatum) to spend more time on the bigger guys. So Jayson is usually guarding twos and threes, has been the whole year, and now there will be moments when he guards fours. We’ll rotate (Marcus) Smart there some as well. But that's tough for Kemba (Walker) and (Evan) Fournier to do. And Aaron as well. You even saw that the other day on some of Jimmy Butler‘s drives against Aaron. Aaron tried to stop him, but Jimmy got to where he wanted to go. So there's a physicality that we’re going to have to find and that may present opportunities of the Jabari Parkers, Semi Ojeleyes, Grant Williams to step into that other spot and fill that void for appropriate minutes in different games and different situations."

If Brown undergoes surgery this week, the torn scapholunate ligament could take anywhere between 3-6 months to repair and that means the Celtics wing may be back on the basketball court by August or worst case scenario late November, early December.
Meanwhile, the seventh place Celtics at 35-33 are two games behind the sixth seeded Heat (37-31), as both are seeking to win the season series (1-1) tonight and avoid a possible 'play-in tournament.'
Joel Pavón
Follow @Joe1_CSP