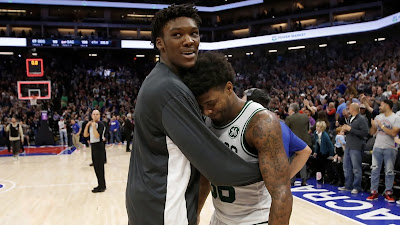 The NBA announced Marcus Smart has been suspended for one game after "directing threatening language towards a game official" during the Celtics' 119-115 loss to the Oklahoma City Thunder Tuesday night.
Smart will serve his suspension without pay Wednesday night, as the team will host the Charlotte Hornets at TD Garden.

The NBA announces a one-game suspension for Boston’s Marcus Smart for directing threatening language at a referee: pic.twitter.com/SutRigQuwF


Just as the Celtics were prepared to have two starters return to the lineup in Robert Williams (knee) and Jayson Tatum (ankle), team officials were informed about 5:30 PM Wednesday afternoon about Smart's suspension -- the same time the league released it's statement, according to Brad Stevens.


Smart received a technical foul late in the fourth quarter versus the Thunder but it appeared the veteran guard had more than one long and heated discussions with the officials throughout the night. Per the NBA's press release, the discussions apparently continued well after the game had ended.
With Kemba Walker still out with an oblique strain sustained in Sunday's loss to the Hornets, it appears rookie Payton Pritchard will most likely handle point guard duties with the starting backcourt out tonight.
On Tuesday, prior to tip-off against Oklahoma City, Stevens gave an update on Walker's injury and said he'd be re-evaluated on Thursday before informing the media the All-Star guard would miss at least two games.

"We're hopeful, we're going to reevaluate him Thursday, but he's got a strain on that side," Stevens said in his pregame presser. "He got some imaging done. So he's definitely out the next two."

Stevens reiterated that while Walker did leave the game briefly on Sunday, he did not reaggravate the injury once he returned to finish the game.

"He didn't feel it after that point," Stevens said. "He felt it when it happened, he went back, got it checked out, was cleared to go. It doesn’t sound like it would have gotten worse after that time. We did think — and our training staff did think — that if he was going to be sore, it was going to be the next day. So I don’t know if that’s the adrenaline of the game or whatever the case may be, but he was cleared to go back. And it doesn’t sound like it got worse throughout the game. It sounds like it was that moment."

Meanwhile, the Celtics will welcome back Robert Williams after missing seven straight games with a sore left knee, as the team is 3-4 in his absence after going 8-2 since becoming a starter prior to his injury. Plus, Tatum also makes his return after missing one outing to nurse a left ankle impingement that he's had issues with for a few weeks now.
Boston and the Hornets will do battle for the second time in three days when they tip-off tonight starting at 7:30 PM .