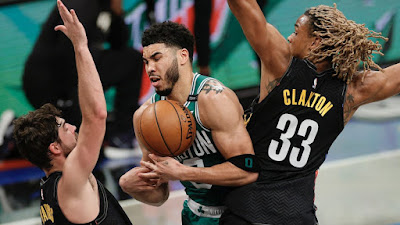 Celtics All-Star Jayson Tatum hasn't had the best of series when it comes to this current first round matchup against the Brooklyn Nets, as Boston is trailing 0-2.
The latest major concern isn't Kyrie Irving's comments about the fear of possible "subtle racism" from Celtics fans, but instead it's if Tatum will even suit up in Game 3 Friday night.
Tatum got poked in the eye by Kevin Durant while trying to get a loose ball during the third quarter of the Celtics' Game 2 loss on Tuesday. He went to the locker room immediately to get looked at and did not return to play the rest of of the night.
Celtics coach Brad Stevens gave an update on Tatum's status Wednesday based off of the team's training staff ahead of Game 3.

"The last I heard, which was last night when we got off the plane, was that he was doing better and that Friday looked like a 'probable' at that time," said Stevens during his appearance on 98.5 The Sports Hub's Zolak and Bertrand Show.
"You never know how guys are going to get up and react and how it's going to feel today and everything else. But they felt pretty good about him being able to go."

"Yeah, I think he's going to be fine," Ainge said on 98.5's Toucher & Rich Thursday morning.
"All I know is that he was poked in the eye, and it was painful and [his vision] was blurry and he was having trouble seeing out of it," Ainge explained. "But with rest he's doing much better, better than I am with the allergies."

In two games so far, Tatum isn't exactly putting up his typical numbers, as the Celtics forward is averaging just 15.5 points on 27.5% shooting from the field and 2-of-7 from behind the arc.
Game 3 will tip-off at 8:30 PM EST on ABC Friday night and Game 4 is scheduled for Sunday, which could see a "near full" crowd capacity at the Garden -- as Tatum and the Celtics look to keep their season alive.