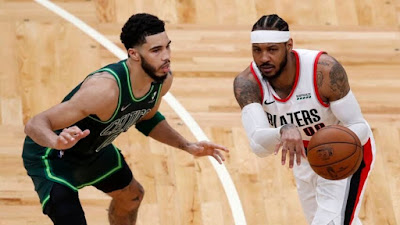 Eyeing a three-game win streak, the Celtics returned to TD Garden for a pivotal matchup against the Trail Blazers (36-28). Only 1.5 games behind the Knicks for fourth place in the East, and a half a game behind the Hawks for the No.5 seed, the C's would need their two stars to carry the load.
While Tatum's scoring certainly helped Boston stay competitive, it wasn't enough to overpower the Blazers, who made key stops down the stretch. Portland's backcourt couldn't be contained, as the Celtics defense was torn apart all night with their shooting. Despite shooting 48% from the field, Boston dropped an important game on their home court as the Trail Blazers snapped the Celtics' two game win streak in a 129-119 victory.

"Our mindset is that it doesn't matter if we won or lost today. You can't change that," said Tatum in his postgame comments, not dwelling on the loss. "You have to get ready for the next one. We'll get ready for the road trip to Orlando.

Tatum led the Celtics in scoring with 33 points (11-of-19). Jaylen Brown added 16 points to pair with 11 rebounds, but shot poorly from the field-- making only six of his 22 attempts. Evan Fournier bounced back after a scoring slump, putting together a 21- point performance-- missing only two shots (8-of-10). Aaron Nesmith (16 points, 6-of-7 from field) and Payton Pritchard (13 points, 4-of-6 from field), brought some scoring off the bench.
C.J McCollum also tied a game-high of 33 points, shooting 12-of-20 from the floor and knocking down four threes. Adding 26 points, Lillard was the Trail Blazers' best playmaker, dishing out 13 assists. Norman Powell tallied 23 points, while Jusuf Nurkic added 14 points and 11 boards.
It was a high-scoring affair as both the Celtics and Blazers caught fire early. Both teams knocked down their shots with ease in the first half, as Boston made 12 of their 20 attempts from downtown with Portland shooting 10-of-17 in that category.
As Jaylen Brown struggled to find his rhythm, Jayson Tatum dominated offensively leading the team in scoring to keep up with Portland's high scoring backcourt duo that combined for 34 first-half points.
Following up his career-high 60 point performance against the Spurs Friday night, Tatum totaled 24 points alone in the first half, making 8-of-14 field goals— including shooting 4-of-5 from deep.
Continuing to be aggressive, Tatum took over in the second quarter, scoring 14 points after an eight point effort in the first. Making tough fadeaways on two defenders, finishing contested layups at the rim, and drawing fouls, Tatum's scoring arsenal was on full display.
Scoring over 10 points only one time over his past five games, Evan Fournier regained some confidence scoring 10 in the first half alone. He carried that over to the second half, where he added another 11 points after making his first seven field goal attempts.
Struggling in his return from COVID, Fournier hasn't been himself of late.

"Right now, it's actually doing a little bit better. But at first, the bright lights were bothering my eyes, my vision was blurry and everything was going too fast for me. That is the case," said Fournier during his postgame press conference. "My depth perception is really bad right now, but I saw a specialist and she gave me some exercise, hopefully I can get better."

Taking note of his offensive struggles, Fournier was happy to bounce back, despite the loss.

"It felt good to get in, make shots and feel like myself a little bit," he said.

After his strong first half, Fournier carried his momentum into the third quarter, adding another eight points. Boston's second unit backcourt also delivered, led by Pritchard and Aaron Nesmith.
Despite the team committing seven turnovers in the third quarter, the Celtics got some unexpected production from some of their inconsistent scoring options. Taking some of the load off Tatum, the trio of Fournier, Nesmith and Pritchard shot 15-of-16 from the field, and 10-of-11 from beyond the arc after three quarters.
While the Celtics kept it close in the fourth quarter, the Blazers seemed to always be a step ahead. Fournier's late 3-pointer off a Tatum drive and kick cut the deficit down to three with just over two minutes to play, but that late comeback bid was put to rest quickly.
Originally called an offensive foul after colliding with Nurkic on a screen, Marcus Smart was ejected on the following possession after the officials overturned the call-- a play the Celtics couldn't recover from. In the end, the Celtics couldn't respond to the Blazers' scoring and a Carmelo Anthony pull-up 3 sealed the deal.
The loss was disappointing, but Boston's tough night got worse in the final minute. Colliding with Tatum on the sideline, both Brown and Tatum visibly grabbing their leg in pain went to the locker room.
Concerned about the health of his star players, Stevens is still waiting on an update of their status.

"We'll take tomorrow off and then we'll practice Tuesday and then go from there. We'll probably obviously have more of an update with how everyone's feeling then," Stevens said of Tatum and Brown postgame.

There's still some unknowns regarding Brown's injury, but Tatum doesn't seem to be concerned after getting banged up late.

"We just collided and I guess he stepped on my foot and he fell on my leg. But I should be alright. We'll see after tomorrow. I was able to walk off the court by myself, so that's a good sign. I hope [Jaylen's] alright," he said after the game.

It remains to be seen whether they’ll be healthy enough to return after three days of rest heading into a road matchup with Orlando.
With playoff seeding implications on the line, the loss was a tough blow for Boston, who now sit seventh in the conference at 34-31 with seven left  to play. The Magic (20-44) will host the Celtics on Wednesday night at 7:00 PM, and will be available to stream on NBC Sports-Boston.

The Celtics dominated the Blazers on the glass-- outrebounding them 45-36. Boston made more 3-pointers, but the Blazers shot better from the field -- 52% to 48% -- and made nine more free throws than the Celtics.
Boston led with 29 assists, but committed 18 turnovers compared to Portland's nine turnovers. The Blazers also added eight steals and five blocks, compared to the C's three steals and six blocks.
Ian Carrano
Follow @IC_Sports1