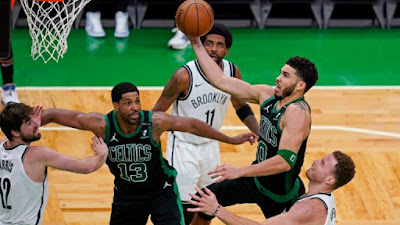 Jayson Tatum played like his life depended on it or at least with the motivation of not wanting his team to fall into a 0-3 hole, as the Celtics beat the Brooklyn Nets 125-119 in Game 3 Friday night.
With the anticipation of what kind of environment was to be expected at TD Garden, especially in a playoff atmosphere, which hadn't been seen in over two years and in the wake of Kyrie Irving's comments this week, it was well worth the wait.
When it was all said in done, Tatum put together one of the best playoff performances in Celtics history, as the All-Star forward exploded for 50 points (new postseason career-high) against the Nets' superstar trio to cut Brooklyn's series lead 2-1 in this best-of-7 first round matchup.

"It's just one of those nights." Tatum said during his postgame presser. "A tough shooting night the first game and I didn't get to play much the last game because I got poked in the eye."

Tatum hit 16-of-30 from the field, including 5-of-11 from 3-point range, to go along with seven assists and six rebounds -- playing all but seven of the game's 48 total minutes.

"We had a lot of guys step up tonight around Jayson being special," Boston coach Brad Stevens said.

On an emotionally charged night at the Garden, Tatum netted 50 points for the fourth time this season. Tatum, who scored 50 just 10 days ago -- the last time he played at home in the Play-In against the Washington Wizards -- was listed as probable after getting poked in the eye in Game 2 Tuesday.
While averaging a mere 15.5 points on 27.5% shooting and 2-of-7 from behind the arc in the first two games in Brooklyn, Tatum took full advantage of the Garden faithful.

"There's nothing like playing at home in front of your home crowd, your family" Tatum said. "I've played a lot of games in this arena. It's my favorite place to play. So I'd like to say I'm most comfortable here."

Tatum becomes the sixth player in franchise history to score 50 points in a playoff game and the first since Isaiah Thomas back in 2017 to accomplish that feat. Other than Thomas, Tatum joins Ray Allen, John Havlicek, Sam Jones and Bob Cousy as the only Celtics players to reach the 50-point playoff club.

"He was just locked in mentally," teammate Marcus Smart said in postgame comments. "We're going up against a juggernaut of a team. Like I said before, the world knows it and we know it. It's not going to be easy. You can't lay down, you can't take a step back. You have to be able to press forward and that's what we did tonight."

Smart added 23 points on 8-of-11 from the floor,  5-of-8 from deep and six assists. Tristan Thompson recorded 19 points, 13 rebounds for his second straight double-double, while Evan Fournier chipped in 17 points and 4-of-7 from 3.
It was Irving's first game in front of fans in Boston since heading to Brooklyn via free agency over two years go, the Nets All-Star guard struggled to get any sort of rhythm going offensively -- shooting 6-of-17 overall and 2-of-6 from 3-point territory for 16 points -- while hearing boos from the 25% capacity crowd each and every time he touched the ball and even a few vulgar chants as well.

"It's basketball. I've been in a few environments in my life," Irving said during his postgame press conference. "Like I said, as long as it's just strictly the nature of basketball out there and there's nothing extra, I'm cool with it."

James Harden led the Nets with a near triple-double of 41 points (11-of-18 shooting, 7-of-12 from behind arc), 10 assists and seven rebounds. Kevin Durant scored 39 points and grabbed nine rebounds as Brooklyn's trio were the ones to reach double-digit scoring.
The Celtics got off to a slow start for the second consecutive game, as the Nets went 4-of-5 from 3 to lead 19-4 to open up the first period. Tatum scored six unanswered during the C's 10-3 spurt on their way to outscoring Brooklyn 19-13 the rest of the quarter to go ahead 33-32.
Tatum had 21 first half points and the Celtics had a 61-57 edge at the break, while Harden and Durant had 17 apiece.
Boston continued to ride the wave of the home crowd to start the second half, taking a 70-62 advantage with 9:15 left to play in the third, before the Nets used a 10-2 run to grab a 73-72 lead on an Irving rare made jumper. It was short lived as the Celtics broke a 75-75 tie on a go ahead 3 made by Smart to put them up for good.
Tatum scored 11 points in the final 4:46 of the quarter to help the Celtics take an 84-96 lead into the final frame.
The Celtics increased their lead to 16 with 9:25 left to play -- the second biggest of the night (17 was the largest in the third). The Nets chipped the deficit to five on a pair of Irving made free throws with a minute remaining, but Tatum hit a 20-foot pull up for his 50th point to ice the win with 41.8 seconds left on the clock.
Tatum is the first Celtic to reach 40 points in three quarters since Isaiah Thomas on May 2, 2017. Boston shot 50.6% from the filed, including 16-of-39 on 3s after just hitting 39.7% overall in the first two games.
The Celtics look to even the series on Sunday in Game 4, as the Garden is expected to increase to "near full capacity" after the state of Massachusetts will lift it's COVID-19 restrictions on Saturday. TNT has the tip-off at 7:00 PM EST.

The Nets shot 45.2% from the field and 16-of-38 from 3, while the Celtics won the battle of the glass 46-37 and the paint 46-30. Boston assisted 21 times on 45 made baskets and Brooklyn handed out 16 dimes on 38 buckets. The C's turned the ball over 14 times which led to 18 points and the Nets 10 turnovers were converted into 15 points for Boston.
Robert Williams sprained his left ankle after six minutes of playing time in the first half and did not return, as he walked out of the arena in a walking boot. His status is unknown for Game 4 and beyond.