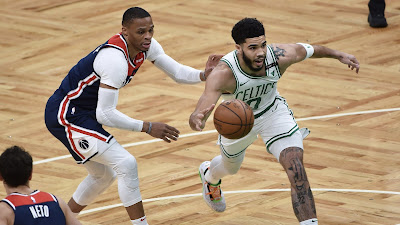 Jayson Tatum gave the Celtics new life, as they beat the Washington Wizards 118-100 in the Play-In game Tuesday night at TD Garden to clinch a playoff berth at the No. 7 seed.
Tatum scored 32 of his 50 points in the second half, shooting 14-of-32 from the field and 5-of-12 from behind the arc to give the Celtics a chance to compete in the postseason this year.

"I know that my teammates, I've earned their respect. I've earned the respect of the guys I play against," Tatum said in his postgame presser. "I believe in myself. That's all that matters."

Kemba Walker finished with 29 points, going 6-of-14 from deep, while Tristan Thompson added 12 points and 12 off the bench for the Celtics, who will meet the No. 2 seed Brooklyn Nets in their first round matchup beginning this weekend.
Boston lost 10 of their last 15 games to conclude a disappointing regular season at 36-36, something coach Brad Stevens says it hasn't been easy due to multiple players being injured and having to deal with stints of being in the COVID health and safety protocols.

"We've been through a lot, so we're hardened in a lot of ways," Stevens said after the game. "We've been backs against the wall for most of the year. It takes a lot of togetherness and it takes staying together through tough times."

Brad Beal lead the Wizards with 22 points (10-of-25 shooting) to go along with nine assists, despite managing a hamstring injury. Russell Westbrook was held to 6-of-18 from the floor for 20 points, 14 rebounds and only five assists. Ish Smith chipped in 17 points and eight rebounds for Washington -- who still has a shot to make the playoffs Thursday when they face Indiana Pacers -- who beat the Charlotte Hornets 144-117.
The Celtics shot just 39.6% from the field and were really missing that offense from Jaylen Brown (wrist surgery), especially in the first half -- going 5-of-22 from deep in the first 24 minutes, and 7-of-24 overall just in the second period to trail 54-52 at the break.
But Boston opened up the third on a 22-4 run to take a 74-58 lead and scoring a total of 38 points to end the quarter, but the Wizards were within striking distance, as they trailed 90-80 heading into the final frame.
The Celtics used a 15-6 run that pushed the advantage to 106-88 with 5:32 left to play and Washington went cold, especially from 3 (3-of-21 shooting) and kept turning the ball over (16 total).
Tatum, meanwhile kept pouring it on, picking up the offensive slack and was clearly the best player on the floor.

"Jayson was special," Walker said in his postgame comments. "It ain't new to me. I've been watching this guy put in this kind of work over the last year or so, year or two. So I'm here for the ride. It's fun."

Celtics hit 15-of-45 from 3-point range, while the Wizards hit 43.5% of their total shots, while Boston handed out 20 assists on 38 made baskets and Washington had 17 dimes on 40 buckets. Both teams finished with 49 rebounds apiece, but the C's lost the battle of points in the paint 56-38.
Joel Pavón
Follow @Joe1_CSP