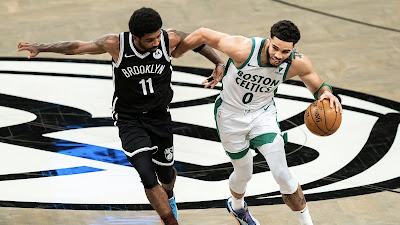 The Celtics clinched the seventh seed after beating the Washington Wizards 118-100 in the play-in tournament on Tuesday night at TD Garden.
At 36-36, it wasn't ideal for Boston to fall so low in the Eastern Conference playoff picture after a deep postseason run last year, but their reward this time around is a date with the start studded super-team known as the second seed Brooklyn Nets (48-24).
The first round matchup kicks-off on Saturday night at the Barclays Center, as Game 1 is set for an 8:00 PM start on ABC.
Here's what the rest of the schedule looks like, which was released Thursday morning:
* If necessary
The last time these two franchises met in the playoffs was back during the 2002-03 season, when Jason Kidd and the then New Jersey Nets swept the Celtics' duo of Paul Pierce and Antoine Walker 4-0 in the second round.