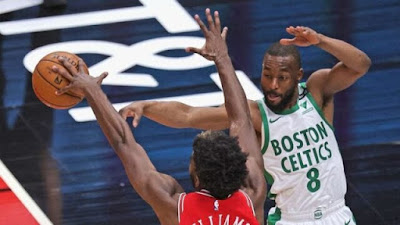 With playoff implications on the line, the Celtics began the night in sixth place before the Chicago Bulls kept their postseason hopes alive with a 121-99 blowout win Friday night.
Kemba Walker scored a season-high 33 points on 10-of-22 shooting and 6-of-13 from 3-point range, while Evan Fournier added 17 points. Jayson Tatum struggled from the field, going 3-of-15 to finish with only nine points in 38 minutes.

"They're a tough matchup for us," coach Brad Stevens said. "Obviously, I think they played really well, and we did not shoot the ball well, and it kind of went from there."

The Celtics, who are looking to avoid the 'Play-In Tournament,' were without Jaylen Brown (sprained ankle) and Robert Williams (turf toe). They're now 35-32 on the season and in seventh place with five games left to play.
Coby White and Zach LaVine each finished with 25 points apiece, while Nikola Vucevic recorded his first triple-double of his Bulls career -- 18 points, 14 rebounds and 10 assists -- to lead Chicago to a 28-39 record and pulled within three games behind the Washington Wizards for the final spot in the play-in.
Boston trailed by as many as 21 in the third quarter before using a 12-0 run to cut the deficit to eight in the fourth with 6:03 left to play.
Chicago went on a 16-4 run and held the Celtics to just nine points the rest of the way, as Stevens emptied his bench with 3:02 remaining.
It was a back and forth first quarter, as the Bulls grabbed a 60-46 lead at halftime and it was all downhill for Boston going forward.
Chicago shot 18-of-40 from behind the arc, out-rebounded the Celtics 52-47 and forced 14 turnovers.
The Celtics were winners of three out of their last four and trail the Heat (36-31) who are in sixth by one game. They'll host Miami Sunday afternoon at 1 PM on ESPN and again Tuesday night.