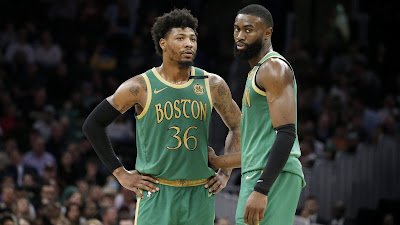 With six games remaining, the Celtics are looking to avoid the 'Play-In Tournament' as they're neck and neck with the Miami Heat, who face each other twice in the next few days.
Coming off a 36-point blowout win against the Orlando Magic, Boston may welcome back All-Star Jaylen Brown in time for Sunday's crucial matchup against the Heat.
Celtics president of basketball operations Danny Ainge gave an update on Brown's injury and possible return during his weekly appearance on 98.5 The Sports Hub's "Toucher & Rich."

"It's looking like that he'll probably be returning on Sunday," Ainge said on Thursday when asked about Brown's status.

Brown suffered a right ankle sprain in a loss to the Portland Trail Blazers, as he didn't travel with the team for Wednesday's game and has already been ruled out for the tonight's tilt against the Chicago Bulls on the road.
The Celtics return to the TD Garden for a two-game mini series with the Heat beginning on Sunday and again on Tuesday in their regular season home finale. Both teams currently have the same record of 35-31, with Boston wining the only meeting earlier this year.
Ainge was asked about the new playoff format due to the shorten of games and what his preference is.

"I think that there are some good things about the play-in tournament," Ainge said. "I prefer the older way, but this is just what we are dealt with and we have to make the most of it."

Of course Ainge spoke about the ejection of Marcus Smart at the end of the Celtics' loss to the Blazers and how he didn't agree with the call.

"I don't think it was worthy of being ejected from a game," he said.

As for the NBA's system of reviewing calls, Ainge believes that it's becoming an issue on the time it takes for officials to view replays and make a decision.

"The league is aware that they need to do a better job with them, and they're trying," Ainge said of the review process. "They're trying to make the game a better game to watch, and we know the interruptions that are caused by the replays. I know that they're working towards those, but I don't know what the answer is. I don't even know what the process is in that specific situation."