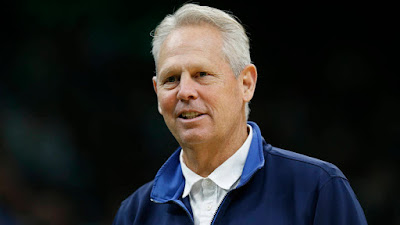 The Celtics are coming off the heals of winning their play-in tournament game against the Washington Wizards 118-100 to clinch the seven seed to now face the Brooklyn Nets in the first round.
Danny Ainge made his weekly appearance on 98.5 The Sports Hub to discuss a plethora of topics including his own future with the team, Jayson Tatum's recent play, Robert Williams' injury and the fan capacity at TD Garden, as the Celtics president of basketball operations had plenty to say.
It was only a week ago that Ainge brought up how there will be some changes this offseason and when asked if that meant the possibility of him taking a step back from his day-to-day duties, the Celtics GM says that currently "there are not" any plans to change his role within the organization.

"I have thought that way before, but that's not going on right now," Ainge said Thursday morning on "Toucher & Rich."
"I mean, I have a really good staff of people," Ainge added. "With Mike Zarren, and my son Austin, and Dave Lewin, and Remy Cofield, those guys have been doing a lot more over the last couple of years. I have been delegating a lot. Those guys are very, very capable."

Ainge also called his 23-year old All-Star forward a "top-echelon player" following Tatum's 50-point performance to get the Celtics into the postseason for the seventh straight year.

"He has exceeded expectations from when we drafted him," Ainge said. "I knew he was going to be a good young player, but all the great ones are."

Despite Wizards' coach Scott Brooks calling Tatum a future league MVP, Ainge wasn't quite ready to go there just yet, but he did give him the ultimate compliment.

"I think it's easy to see now that Jayson Tatum is going to be a Hall of Fame player," Ainge said. "I don't think anybody doubts any of that. But I hate to give him those kind of accolades because I'd like to try to push him to work harder, and meet their goals. And I don't want him to get complacent."

While the governor of Massachusetts Charlie Baker announced on Monday that all sports venues would return to full capacity starting on May 29, when the state plans to lift COVID-19 restrictions, Ainge noted that the NBA has not changed their policies yet before the Celtics can make additional tickets available.

"I don't know that," Ainge said when asked if attendance would be at 100-percent capacity for Game 4 against the Nets on Sunday, May 30.
"We're waiting to figure all that out," Ainge said. "There's our state and then there's the NBA. There's all sorts of protocols and hoops to jump through. So it's pretty complicated. I'm not sure how that's going to work.
"I haven't heard that when it comes to NBA capacity," Ainge added. "I'm not sure that we're there yet."

Game 3 will be the first meeting at TD Garden of the series that the Celtics will host the Nets on Thursday, May 28.
As for Robert Williams III, who left in the third quarter against the Wizards and did not return due to his lingering turf toe injury, that he's been dealing with for a few weeks now, Ainge didn't provide much of an update on the Celtics big man.

"He's day-to-day, I don't know," Ainge said when asked if Williams would be available for Game 1 in Brooklyn. "[Wednesday] was a day off, so we'll see how his toe responds and just going to take it day by day."

According to coach Brad Stevens, Williams was "still very sore" and did not practice on Thursday.

"I can't imagine him practicing tomorrow based on how he was walking around today," Stevens said during his presser after shootaround.

Celtics tip-off against the Nets in Game 1 Saturday night on ABC at 8:00 PM EST. For a look at the rest of the series schedule, click here.