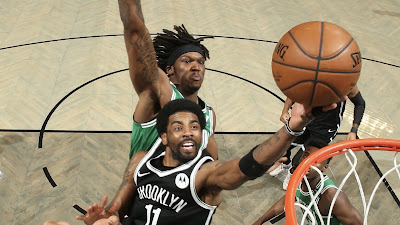 Ahead of Tuesday night's Game 2 matchup against the Brooklyn Nets, former Celtics legend Cedric Maxwell made an appearance on 98.5 The Sports Hub's "Toucher and Rich" this morning.
Discussing the team's future, their young star duo, the factors that have played a role in their struggles this season and more, Maxwell didn't hold back from expressing some bold opinions about the Celtics, who barely snuck into the playoffs.
While many believe a big part of their inconsistencies this season have been based around their overall talent, Maxwell views it at a different angle. Aside from their chemistry and individual talent, he believes their lack of physicality has hindered their ability to compete this season -- which begins with their core players.

"I think the biggest thing about this team right now is toughness," said Maxwell Tuesday morning. "Tatum and Brown are two great players. They probably played about 650 games together combined so far in their career. You name me one time when you saw either one of those guys go up and confront another guy on another team after he hit him or knocked him down."

That became evident in Game 1 of the series, where Maxwell pinpoints one play involving Tatum and Kevin Durant, which didn't sit right with him.

"One play in particular, and it pissed me off the other day, I'll just be frank with you. Tatum was in a situation with Durant. Durant came up and hit him with an elbow in the mouth late in the game. Drove down the lane and then Tatum kind of ticky - tac fouled him and hit him on the arm. But immediately he went to the referee and said dude he hit me with an elbow. That's not the point. The point here is you go directly to that guy. Marcus Smart can't be your only crazy uncle on your team if you're going to win basketball games. Your two top players have to be more aggressive," said Maxwell.

Citing players like Larry Bird and Kobe Bryant who have been involved in many altercations during their storied careers, he believes Tatum needs to follow their lead and "advocate" for himself along with his teammates. While giving high praise to Tatum’s scoring, Maxwell thinks in order for his team to reach their full potential, he’ll need to stand up for himself in similar situations to set an example for his teammates.

"Tatum is probably going to be the greatest scorer in the history of the Celtics, but if this team is going to go to another level, he's going to have to take up for himself from time to time and then that’s going to go down the line and everyone’s going to step forward," said Maxwell.

Addressing concerns regarding his on-court demeanor last month in a press conference, Tatum talked about his "lead by example" leadership style, which Toucher and Rich mentioned to Maxwell about on the show. Pointing out recent Hall of Fame inductee Tim Duncan, Maxwell shared a story that illustrated the type of mentality the Celtics must have to generate more winning.

"Kevin Garnett will tell you that he was mean. There was things that Tim Duncan did. I remember Kendrick Perkins one day turned around to all of us. He had a great game against Tim Duncan and put the handcuffs on him, 'I'm locking him up.' Tim Duncan went out and gave him 35 the next time they saw him and just glared at him. This is the mean-- spirited that has to come along with your team that this team does not have."

With likely a busy offseason upcoming, Danny Ainge will have some big decisions to make regarding his team. Teams like the Nets, 76ers, and Bucks have put the pressure on Boston to make significant moves to compete in the Eastern Conference. That leaves making decisions with pending unrestricted free-agent Evan Fournier and Smart, who will become a free-agent after next season.
Besides those decisions, one move Maxwell believes Boston needs to make is adding players that stir a culture change, embodying some of the intimidating Celtics teams in the past.

"Danny Ainge for me has to go out and get one player. Let's get Marcus Smart's evil twin. Serge Ibaka. Somebody who's going to knock somebody on their behind. Aaron Baynes was one of those kind of guys. The Celtics don't have enough of those mean spirited guys that are going to take nothing from somebody else," said Maxwell.

Boston will certainly have their hands full the remainder of the series, and will be in store for a busy offseason. Considering Maxwell's comments, the Celtics will need to put together a more physical roster next season that excels more on the defensive end. Sharing his current outlook on his former team, Maxwell’s appearance on the show definitely caught the attention of many Celtics fans.