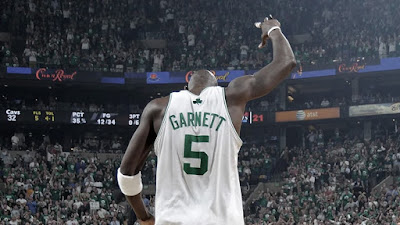 Kevin Garnett only knew one way to play for over two decades and that was to leave it all out on the floor.
"The Kid" who entered the NBA straight out of high-school, wrote the last chapter of a 19-year playing career by entering the Naismith Basketball Hall-of-Fame. Garnett reached the pinnacle of the basketball world on Saturday, officially closing the book on that part of his life forever.

The iconic star better known as "The Big Ticket" revolutionized the power forward position, as Garnett's journey began in Minnesota, calling it home for 12 seasons after being drafted with the fifth overall pick in the 1995 NBA Draft.
After seven straight first round exits in the playoffs for the Timberwolves, Garnett thought he had finally got the monkey off his back during the 2003-04 campaign, which also was the season he won league MVP honors, but fell short in the Western Conference Finals to the late-great Kobe Bryant and the Los Angeles Lakers.
With his first real taste of playoff success, the reigning most valuable player would not see the postseason for the next three years and though he never wanted to be traded, Garnett accepted the fact that it was time to move on if he wanted to compete for a championship.
While Garnett was still in his prime at the age of 31, his window of opportunity to win was slowly starting to close and despite initially not being interested in coming to Boston -- the basketball gods blessed the Celtics with a trade that brought in veteran Ray Allen to pair up with K.G.'s old friend in Paul Pierce.
Suddenly, Garnett saw himself in Celtic green and possibly following in the footsteps of legend Bill Russell, who he was already acquainted with and idolized.
On July 31, 2007; Garnett was introduced as a Celtic -- ushering a new "Big-3" era in Boston that created a quest for banner No. 17 buzz for the first time since the days of Larry Bird and the tail-end of the 80's.
In a season that was immediately labeled as either championship or bust and in year one of the experiment between Pierce, Allen and Garnett, no one expected a 24-win team the season prior to go ahead and win 66 games -- becoming the biggest single season turnaround in league history.
It didn't take Garnett very long to realize that Boston had welcomed him with open arms, as Celtics nation yearned for another parade after a 22-year drought and they didn't have to wait very long once the former MVP arrived.

"The fan base in Boston was over the top, man," Garnett said to reporters on Friday. "People would follow you home, stand outside your gate when you got home. People wanted to pump your gas. The fan level in Boston was just another level. I learned to embrace it."

Less than 11 months later, all of Garnett's hard work and sacrifice paid off, as the Celtics beat the rival Lakers in six games to capture the franchise's 17th title and that would be the highlight of K.G.'s career -- winning the first and what turn out to be his only ring during his legendary run.

"It meant everything, man," Garnett recalled of his 2008 triumph in Boston. "You come into the NBA wanting to win, and losing is part of it, but that doesn't mean you have to accept it. Getting with a storied franchise like Boston gave me life, gave me breath and gave me purpose.
"The players that you're playing actually made the experience monumental, made it magical. The city was waiting for something big, or something different to happen versus where it was, and when we went, we just never looked back."

Though the only thing left for Garnett to do after that historic first season was to capture yet another championship to hang an 18th banner from the TD Garden rafters, but unfortunately that burning desire to repeat never came to fruition in Boston.
However, Garnett did return to the NBA Finals against the Lakers in 2010, and even Game 7 of the Eastern Conference Finals in 2012 -- pushing LeBron and the Miami Heat's version of a big-three -- only to come up short both times before a trade to the Brooklyn Nets in the summer of 2013 ended his six year run with the Celtics.
Wining a championship and Defensive Player of the Year in the same season was just one of the many accolades Garnett had won, along with league MVP in 2004, being named an All-Star 15-times and making an All-NBA team nine times. Still, after all of those accomplishments, Garnett had all but one regret in 19 years.

"My only regret in any of this is that I should've came to Boston a little earlier," Garnett said. "But other than that, it was magical."

Garnett during his six years in Boston didn't just embrace "Celtic Pride"-- a term coined from the days of Red Auerbach and still used decades later -- but he embodied and personified it in practice and every game played, while making the Celtics relevant and contenders again in the process.
No one could quite match the work ethic and heart that Garnett possessed, something that set him apart from everyone in not just Celtics' but in the NBA history as well. He understood the responsibility that came with wearing that green and white (sometimes black and green) jersey.
It was no surprise that the Celtics announced last year they would retire Garnett's No. 5 jersey -- a ceremony originally scheduled for some time this season but was pushed back due to the COVID-19 pandemic -- a celebration of what K.G. meant to the team and city of Boston; a gesture that not even the Timberwolves' organization has done yet or plan to anytime soon.

"I'm honored and thankful to have my number retired with the Celtics," Garnett said in a statement. "I will always have immense respect and appreciation for ownership, Danny Ainge, Doc Rivers, my past teammates and Celtics Nation!"

While Garnett appreciated coach Doc Rivers for teaching him the concept of "Ubuntu," it was that Celtic Pride that pushed him to stride for greatness in Boston and want to win, especially during the later years of ages of 35, 36 and 37 -- averaging 15.6 points and 11.6 rebounds per contest in his final three postseason runs with the Celtics (35 games).

“Thank you to all the fans, to everybody. For all that cheered me, booed me. It is because of the fans that athletes are immortalized.” - Kevin Garnett #20HoopClass
— Basketball HOF (@Hoophall) May 15, 2021

As Celtics fans look back at Garnett's time in Boston, they'll remember him as a rare breed that fit right in with the personality of a proud city that appreciates any professional athlete that will fight until they have nothing left and have no issues claiming them as their own.
That's why Garnett will forever be considered a Celtic, even when you can't help but wonder what if he had made his way to Boston just a little bit sooner.