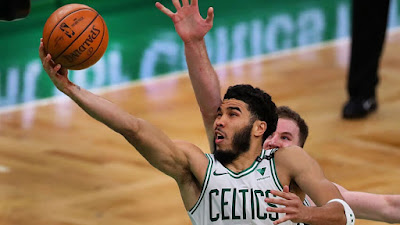 The Celtics wrapped up the month of April with a bang, as they pulled off an historic 32-point comeback to beat the San Antonio Spurs 143-140 in overtime at TD Garden Friday night.
Jayson Tatum set a new career-high 60 points, passing his previous of 53 from back on April 9 against the Minnesota Timberwolves. The All-Star forward shot 20-of-37 from the field, while making 5-of-7 3-point attempts to go along with eight rebounds and five assists.
Tatum netted 21 points in the fourth quarter to give Boston its first lead and then followed it up with 10 more points in overtime, which included a pair of made free throws to ice the game with four seconds left.

"He did exactly what a great player is supposed to do," Jaylen Brown said of Tatum in his postgame presser. "He was efficient, led us, hit timely shots — big baskets — real big-boy basketball. That's what we need. We're going to need that going forward."

Brown scored 17 points, hitting a go-head left corner 3 with 16.7 seconds remaining in OT to give the Celtics the lead for good. Rookie Aaron Nesmith finished with 16 points off the bench, making an impact for the second straight game and Marcus Smart added a double-double of 10 points, 12 assists.

"I think the best part was obviously coming back and winning and just seeing everybody contribute," said Tatum in his postgame comments. "That just kind of shows the growth of our team — to see everybody contributing when we're down 30 points and just figuring out a way to win the game.

Tatum becomes only the second player in franchise history to score 60 points in a single game, tying Larry Bird who accomplished the feat back in 1985.
Tristan Thompson grabbed a game-high 15 rebounds and scored eight points to help the Celtics win two in a row and move a half-game up on Miami for the sixth seed in the tight East playoff race at 34-30 -- where the Atlanta Hawks have the same record with the fifth seed and both are 1.5 games behind the New York Knicks (35-28) for fourth.

"We haven't been this bad very often. The first half, this was a different level," Boston coach Brad Stevens said. "We just have to stay in the moment and figure out how to be better for 48 minutes. That's it. I'm proud of our resiliency, our resolve, our togetherness, our willingness to put aside whatever happened in the first half."

DeMar DeRozan had 30 points and 14 assists for the Spurs. Dejounte Murray and Lonnie Walker IV finished with 24 points apiece, and Jakob Poeltl chipped in with 15 points and 10 rebounds.
Despite Tatum having 24 points at halftime no one else had anymore than eight (Grant Williams), the Celtics were held to 34.7% shooting and 5-of-18 from deep. San Antonio, meanwhile shot 71.4% in the first 24 minutes and led by as many as 32 points in the second quarter.
The Celtics trailed 77-48 at the break, the most they had given up all season before overcoming the second largest margin at the half in NBA history since 1954.
The Spurs pushed their lead to 31 points (84-53) in the third, as the Celtics started to chip away in their biggest rally of the season with 10:07 left in the period.
Boston outscored San Antonio 37-19 to trail 103-90 heading into the final frame and used a 20-9 run to start the fourth. Smart hit a 3 to tie it up 116-116 with 5:36 left in regulation, but the Spurs didn't surrender their lead until a step back 3-point jumper by Tatum gave the Celtics a 127-126 advantage with 38 seconds remaining -- their first of the night.
Following a pair of made free throws by DeRozan to tie it back up 128-128, the Celtics put the ball in Tatum's hands with 10.8 seconds left in the fourth, but his 15-footer rimmed out to force overtime.
There were four lead changes in the first four minutes of OT, as Brown put the Celtics up for good in the final 17 seconds to beat the Spurs, who are now 31-31 on the season.
Boston went 13-of-20 from behind the arc in the second half and overtime, going 33-of-59 overall from the floor to nearly double the 48 points they put up in the first half -- outscoring San Antonio 95-63.
The extra five minutes gave Tatum the opportunity to not only beat his career-high for the second time in a three-week span after reaching 50, but catch Larry Bird, who was the only other Celtic to reach 60 -- a record that stood for over 36 years.

"It was something I never would have imagined at this stage," Tatum said.

With eight games remaining, the Celtics conclude their best month of an up and down season at 11-5, as they'll host the Portland Trail Blazers (35-28) Sunday night at 7:30 PM EST on NBATV.