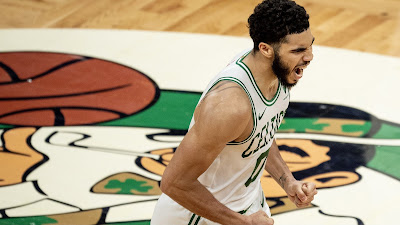 Jayson Tatum welcomed the month of May by being named Eastern Conference Player of the Week for the third time this season.
The NBA announced Monday afternoon that the Celtics All-Star took home the honor after putting up averages of 42.7 points on 54.4% shooting from the field and 59.1% from behind the arc to go along with 6.0 rebounds and 6.0 assists in the three out of the four games played April 26 through May 2.
Tatum led Boston to a 2-1 record, including an historic 60-point performance to overcome an 32-point deficit against San Antonio Friday night.

Phoenix Suns guard Devin Booker and Boston Celtics forward Jayson Tatum have been named the NBA Western and Eastern Conference Players of the Week, respectively, for Week 19 of the 2020-21 season (April 26 - May 2). pic.twitter.com/FcHlnxFdmB


Tatum becomes just the second player in franchise history to score 60; tying Larry Bird for the most points in a single game. It was also the 23 year-old forward's new career-high after surpassing his previous record of 53 points just three weeks prior against Minnesota. Tatum is now the only Celtic to finish with multiple 50-point games in the same season.
With this being Tatum's fourth Player of the Week award of his career and second for the month of April, he becomes the first Celtic to win the honor three times in one season since Kevin Garnett during the 2007-08 championship campaign.
Following his bout with COVID-19, Tatum's number have continued to rise since February and has arguably even made a case for himself as a possible April Player of the Month recipient.

"Obviously when you're mentioned with a top 10 player of all time, in any stat, obviously that's a good thing," Tatum said Friday night, when asked about matching Bird's Celtics record. "Something I wouldn't have imagined at this age. I just come out and play the game that I love and I play at a high level. But once you sit back after the game and think about what it means — Larry Bird, just to be up there, us two, and all the players that came before you to put on this uniform — yes, it's a big deal. I'm grateful for the position that I'm in. Hard to put into words, but that's how I feel."

For the season, Tatum is averaging career-highs across the board of 26.5 points, 7.4 rebounds and 4.4 assists per game.
Joel Pavón
Follow @Joe1_CSP