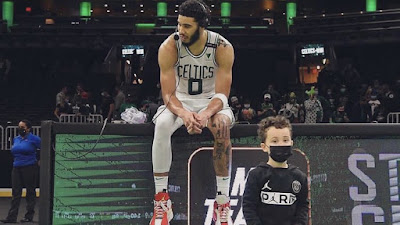 Jayson Tatum led the Celtics to an historic 32-point comeback overtime win over the San Antonio Spurs Friday night, tying a franchise record by scoring 60 in the process.
Following the 143-140 win at TD Garden, the All-Star forward celebrated with of course his son "Deuce," who was in attendance, but Tatum also made a very necessary phone call to his father.

Tatum opened up about the relationship with his father, which he called "rocky" at times, but it was mostly because his dad pushed him to be a great basketball player and would effect their bond in a negative way.

"His tactics was extreme at times, and he for sure pushed me when I was younger and we had some rocky times in our relationship because of how hard he pushed me," Tatum said. "As I've gotten older, we've grown closer, probably since I got into college and now — even before tonight. To hear him say he's proud of me; it means a lot."

While Tatum admits his father may not have been the most affectionate, he's glad he got to share a special moment with him, especially after looking back on all the hard work they both put in that has resulted in many of the great performances while reaching milestones in such a short amount of time.

"He never expressed that when I was younger — not that he wasn't proud of me — that was just kind of his way of always telling me that I need to do more or I can be better," Tatum added. "It kind of drove me, in a way, to prove him wrong. And now, to see where I started and where I’m at — obviously, a long way to go. But, I wouldn’t be here without him."

As the relationship between Tatum and his father has improved over the years beyond just a basketball player and coach, the young Celtics star was asked if how his dad drove him to be great still has an impact on how he approaches the game today.

"I wouldn't necessarily say him anymore," Tatum replied. "We've, for sure, gotten to a point in our relationship, where he's much more of a dad now than a coach or somebody who's trying to teach to me the game. We've definitely gotten to a point where he's just supporting. I think that’s better for our relationship anyways. Out there to prove others wrong? Not necessarily. I think I have the utmost and highest expectations for myself and where I’m trying to get to and where I want to be when it’s all said and done.
"I know I'm young, I know I have a super long way to go. But, I'm determined to get there."

The Celtics overcame a 29-point halftime deficit (77-48), the second largest margin in NBA history, while also completing the third-biggest comeback overall (32 points) against the Spurs -- per ESPN Stats.