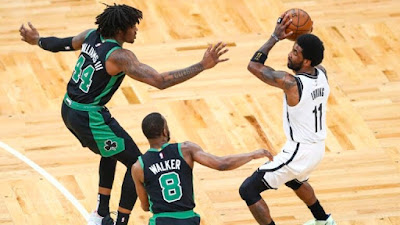 The Celtics may be without Kemba Walker and Robert Williams on Sunday night, as they look to even their best-of-7 series at two games a piece against the Brooklyn Nets.
Walker has been listed as questionable due to a left knee medial bone bruise, while Williams is doubtful with a left ankle sprain -- which he suffered in Game 3.

Williams, who set a franchise playoff record with nine blocks in Game 1, retreated to the locker during the first half of Friday night's victory and was seen leaving the arena in a walking boot.
The ankle injury is the same leg as the turf toe Williams has been dealing with, which forced him to miss five of the Celtics' last 10 games. He reaggravated the injury in a regular-season game against the Miami Heat and again in the Play-In game versus the Washington Wizards -- exiting both those games early.
Walker, who has shot 13-of-40 field goals in this series, was sore Saturday and will undergo tests Sunday before Game 4 tips off at 7:00 PM EST on TNT.

"Kemba was sore today, I think that he'll go through some stuff in the morning tomorrow and [we'll] have a better idea on him," said coach Brad Stevens after practice. "Rob is doubtful. He probably won't do anything in the morning, we'll see how he feels as we get closer to game time. But you saw him last night, even in his stint I thought he looked pretty limited. So, we're hopeful to have everyone available, but at least in Rob's case I'd say that's probably doubtful."