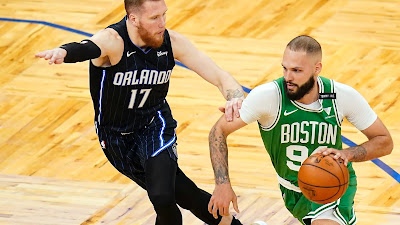 With playoff implications on the line this past week, the Celtics have further complicated things for themselves after going 1-2 over the past three games.
At 35-32 and in seventh place, which is currently 'Play-In' territory, Boston has a tough task ahead with only five games left in the regular season to scrape together some wins healthy or not.
Let's take a look at the good and bad of the past seven days, as their lone blowout win against the Orlando Magic was one of the few bright spots during a short but at the same time long week for the Celtics.
Stud of the Week: Evan Fournier -
There were a few Celtics that could have been named the player of the week, but Evan Fournier’s performances during his last three games stood out. In games against the Trail Blazers, Bulls, and his former team the Orlando Magic, Fournier rebounded from his post-COVID struggles in a big way averaging 18.6 points per game.
Fournier’s efficiency in his return from the league’s health and safety protocols was concerning, but that changed this week as he shot 65% from the floor. Filling in for Jaylen Brown, who suffered a right ankle sprain colliding with Tatum against Portland, Fournier took advantage of his opportunities this week in an expanded role. Selective with his shots, Fournier was dominant from deep this past week, making 62% of his 3-point attempts during that span time frame.
With Kemba Walker nursing an oblique injury last Sunday, Fournier took on more of the scoring load and gave the Celtics another efficient scoring night. Making eight of his 10 attempts from the field, Fournier looked more comfortable in his role and confident in his jumper—something that was not evident only a weeks ago.
Both Jayson Tatum and Walker had strong games this week, but Fournier’s consistency and efficiency in his three games get the nod for player of the week.
Game of the Week: Celtics @ Magic -
Outside of two disappointing losses to the Trail Blazers and Bulls, the Celtics production throughout the rotation on Wednesday night in Orlando. Facing his former team, Fournier shined, giving Boston a true No.3 scoring option without Brown in the lineup.
Tatum and Walker both carried the load offensively outside of Fournier, which contributed to their dominating wire-to-wire performance defeating the Magic by 36. Continuing an impressive scoring stretch, Tatum delivered with 27 points, including having two blocks and steals. Walker, who has looked much more like the All-Star version of himself as of late, tied his season-high of 32 points and drilled six 3-pointers.
The Celtics also got production from their bench led by Payton Pritchard who tallied 14 points, while Robert Williams finished with eight points, six boards, and two blocks. After getting off to a strong start leading 39-27 at the first quarter, Boston never took their foot off the gas as their 32-- point fourth quarter stopped any chance of blowing another late lead.
While it was their only win of the week, it was certainly encouraging for a team that has struggled at times against less-talented teams. With Fournier and Walker picking up their play this week, their performances against the Magic contributed to the Celtics' best game.
Dud of the Week: Marcus Smart -
The emotional leader of the Celtics in Marcus Smart had himself quite a week, getting ejected in the final minute against the Trail Blazers, but believe it or not that was not the worst part for the veteran point guard. Smart shot 7-of-27 in his last three games, including 4-of-16 from behind the arc while averaging 6.0 points, 6.3 rebounds and 7.3 assists (2.6 turnovers) per contest.
Even against the Orlando, Smart finished 1-of-6 with three points, despite dishing out nine assists that night. Compared to his season average of 13.1 points and near 40% shooting from the field and 33% from deep, Smart was way below his usual numbers in a very crucial week for the Celtics.
Stinker of the Week: Celtics @ Bulls -
Once again the Celtics had trouble containing the big Bulls in the middle, as Robert Williams was out with turf toe and Brown missed his second game of the week. Chicago dominated the C's in the second half, despite Boston cutting their 21 point deficit to eight half through the fourth. The would be as close as they would get the rest of the way.
The 22-point loss not only spoiled Walker's scoring a new season-high of 33 points, but it put Boston back within the "play-in" line and are now a game behind the Miami Heat (36-31), who they'll face this week twice to try and control their playoff destiny.
The Bulls shot 18-of-40 from 3-point range and out-rebounded the Celtics 52-47, as Nikola Vucevic notched a triple-double of 18 points, 14 rebounds and 10 assists -- clinching the season series 2-1 over Boston.
Outside of the Walker's shooting performance, Fournier's 17 points was the only other Celtic to reach double-digits in scoring Friday night.

"Obviously, I think they played really well and we did not shoot the ball well, and it kind of went from there," said Stevens in his postgame comments. "But they are a tough matchup for us. Their size and length is an issue."

What to look for This Week: vs. Heat (5/9, 5/11), @ Cavs (5/12), @ Timberwolves (5/15), Knicks (5/16) -
Will Kemba Walker and Evan Fournier sustain their scoring?
As a streaky shooter this season, Walker hasn’t always been able to be the Celtics’ No.3 scoring option on every given night. That has changed recently, as the 31-year-old has been much more consistent. Scoring at least 32 points in three of his last five games, Walker has produced as the elite scorer the Celtics have been looking for all year.
With only five games remaining and the playoffs and upcoming "play-in tournament," once again Walker will be at the forefront of the Celtics’ success. He’s scored at least 20 points in six of his last 10 games, so Walker has certainly become an offensive threat Boston can rely on. However, with all the inconsistency we’ve seen from him this year, the same question remains—which Kemba will show up?
Heading into the final stretch of games in the regular season, all eyes will be on Walker to deliver when it matters most.
The same could be said of Fournier, who is another player that we’ll watch closely heading into the playoffs. He’s also struggled with inconsistency and has been a streaky shooter at times. Will he be an efficient scorer like he proved this week, or will we see more single-digit performances taking more shots than his point totals?
Fournier can shoot the basketball, there’s no question about that, but if the Celtics need him to be the No.3 option if Walker has a bad game, could they trust him to jump into that role? That remains to be seen as Fournier is still working himself back from COVID and is still trying to build chemistry with his teammates.
Both Walker and Fournier will be the barometers of how far the Celtics go in the playoffs if they avoid the play-in tournament. They have some tough games going forward, especially against the Heat who are neck-and-neck with them in the standings, so the Celtics as a team will need to be at their best if they want to avoid a difficult first-round matchup.
Ian Carrano
Follow @IC_Sports1
Joel Pavón
Follow @Joe1_CSP