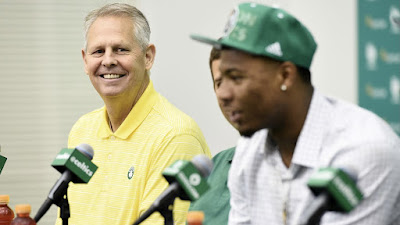 Marcus Smart has had quite the season since missing significant time with a calf-strain and now you can add a one-game suspension by the NBA for "directing threatening language" towards a referee to the list of reasons for not being on the court.
According to a league statement, Smart was having long and heated discussions with game officials during and after the Celtics' loss to Oklahoma City Thunder on Tuesday night.
Danny Ainge was not pleased with Smart having to sit out yet another game, the Celtics president of basketball operations defended the veteran point guard despite the criticism of his behavior and recent play.

"Marcus has grown a lot," Ainge said Thursday on 98.5 The Sports Hub's "Toucher and Rich" Show. "He's been fantastic these last few weeks actually, showing some leadership. I'm not going to make a bigger deal out of this than it is."

While Ainge did acknowledge that Smart shouldn't have let his frustration get the best of him after the game --  "You can't do that," he also felt like Smart was justified in not being happy with some of calls during the game and that he doesn't think a suspension was necessary.
When asked if he thought Smart hasn't had a good season compared to the 2019-20 campaign, Ainge didn't agree saying that the longest tenured Celtic has had "ups and downs" like many players on the current roster.

"Marcus has been huge for us," he said. "He's the heart and soul of our team…I don't think he's regressed other than the regression that's happened from his health and injuries."

Ainge did call the embarrassing loss to the Thunder a "down" moment for the entire team, arguably one of if not the worst defeats this season.
But just as much confidence as he's had with Smart, Ainge also touched upon Evan Fournier's struggles since his bout with COVID-19 and that he'll find his shooting touch soon.

"Evan's not himself right now," Ainge said of Fournier still battling with the after-effects of the virus. "We need him to be as good a team as we can be."