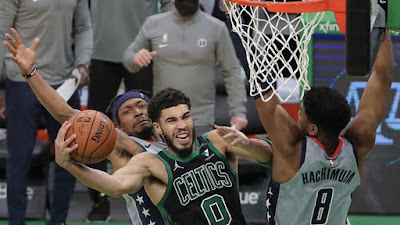 Battling through a season filled with injuries, COVID-19 protocols, and defensive struggles, the Celtics' regular season is officially in the books. Falling to the No.7 seed in the East at 36-36, they'll face the No. 8 Washington Wizards (34-38) in the Play-In Tournament Tuesday night.
The winner of that game will have a date with the Brooklyn Nets in the first round of the NBA playoffs, with the loser facing off against the Indiana Pacers (9) or the Charlotte Hornets (10) Thursday night for a chance to clinch the No.8 seed. The winner of that matchup would play against the top-seeded Philadelphia 76ers in the opening round.
Whether it's facing the 76ers or Nets in a seven-game series, Boston will have its hands full, especially missing one of their top scorers and defenders in Jaylen Brown for the remainder of the season after he underwent surgery last week to repair a torn ligament in his left wrist.
With both Kemba Walker and Evan Fournier assuming bigger roles next to Jayson Tatum, there remains plenty of question marks for a team that has struggled with their depth and inconsistencies all year.
As the Celtics prepare for a matchup against Bradley Beal and Russell Westbrook, they'll need others within the rotation to step up in expanded roles.
Will the Celtics fall to the Wizards and fight for a series against the 76ers, or will they secure a ticket to the playoffs against the loaded Nets? How will they perform in Brown's absence?
Those questions will all be answered on Tuesday night when the Celtics return to the TD Garden.
Who will step up in Jaylen Brown's absence?
Assuming more of the scoring load, Jayson Tatum and Kemba Walker will be asked to do a lot more during the play-in tournament without Brown in the lineup. Along with their top remaining scorers, Evan Fournier will likely be elevated to their third scoring option. Still working his way back from COVID, Fournier will need to be more consistent to be the scorer they traded for at the deadline.
If the Wizards double-team Tatum or Walker, Fournier will need to take advantage of his opportunities along with Marcus Smart to help Boston survive the play-in.
Tatum has proven all year long he's the Celtics best scoring option. Leading the team in scoring with 26.4 points per game on 46% shooting, there's no question Tatum can carry the team with his scoring alone— just watch his 60-point performance against the Spurs.
With more attention being drawn to him, he'll have to find ways to get around double-teams and make his impact felt. Will he be able to dominate offensively or will the Wizards limit him to an ice-cold shooting night like we've seen at times this season?
The same questions could be asked of Walker, who has just started to regain some of his confidence late in the regular season. He's had his fair share of dominant offensive games, but there have been plenty of games where he couldn't find his shot. When he's at the top of his game, Walker can score at least 20 points on any given night, but will that be the Kemba that shows up?
The Celtics have better scoring options at their disposal than the Wizards overall, but if their top players end up having a bad shooting night, Boston could struggle offensively. Their rotational players have been too inconsistent, so players like Payton Pritchard, Aaron Nesmith, and Robert Williams (if he plays) will all need to step up.
Wizards' biggest threat to Celtics:
While the Wizards aren't the most talented team in the conference, they're certainly capable of defeating the Celtics on the road. Finishing 15-5 in their last 20 games, the Wizards will have a chance at securing a playoff spot led by Beal and Westbrook who have formed one of the better backcourts in the East.
With Brown unavailable, the Celtics' defense will need to find a way to contain Washington's backcourt that is capable of taking over any game. Westbrook is a triple-double threat on a nightly basis, and Beal has the talent to drop 30 plus if needed. Having Marcus Smart as their top remaining perimeter player, the Celtics will need someone else to step up defensively to slow down either one of the Wizards' guards.
Fresh off securing the fourth triple-double season of his career, Westbrook will be one of Boston's biggest threats in this game. Averaging 22.2 points, 11.5 rebounds, and 11.7 assists per game, Westbrook is one of the league's best all-around offensive threats. Whether it’s facilitating or scoring inside, he’ll find a way to impact the game.
Although Steph Curry claimed the league's scoring title (32.0 points per contest) after dropping 46 points in the regular season finale, Beal stuck with him all year, finishing second in the NBA with his 31.3 points per game. That kind of scoring can help a team win on any given night which could spell trouble for Boston if their defensive mishaps continue.
Luckily for the Celtics, Beal is still nursing a hamstring injury that believes he won't be fully healed for their play-in matchup Tuesday night.

“There's no setback. I didn’t injure it any worse than it already, so that's positive. Obviously it won't be 100 percent. I've just got to manage it the best I can," Beal said on Monday via ESPN.

Whether Beal is fully healthy or not, the Celtics will still need to make adjustments defensively to slow down Tatum's close friend and fellow St. Louis native. He's a lethal shooter and can get hot quickly.
The Wizards' success will largely be dependent on their backcourt’s production tomorrow night, but if the Celtics want to avoid a chance to be eliminated from playoff contention later this week, they'll need to shut down the Wizards' biggest threats in Beal and Westbrook.
Prediction:
Most will view this matchup as an easy one for Boston who still has three capable scorers and enough off the bench to deliver.
Walker has looked more explosive lately, scoring over 30 points four times over his last 10 games, including a season-high 36 against the Miami Heat a week ago.
Fournier has grown much more comfortable in his role, and could give a needed boost when his shot is falling.
Tatum has carried them offensively before and it could easily happen in this one.
However, it's important to recognize their struggles this season against sub .500 teams like the Chicago Bulls, Cleveland Cavaliers, the Hornets and even the Wizards.
The Celtics definitely have the talent to beat the Wizards but it comes down to which Celtics team shows up. They have more playoff experience, but in a one game play-in anything can happen. Westbrook and Beal won't go away easy.
Boston should take care of business at home in front of their fans, with Tatum and Walker being enough to advance to the playoffs. Their bench will need to produce more, but a lot will hinge on their two remaining stars.
The Celtics won't have a favorable first-round opponent, but at least making the playoffs is a minimal expectation for a group that entered the season as one of the favorites in the East. They have the scoring to overtake the Wizards, it'll just come down to their ability to play together, share the basketball, and get back to playing defense