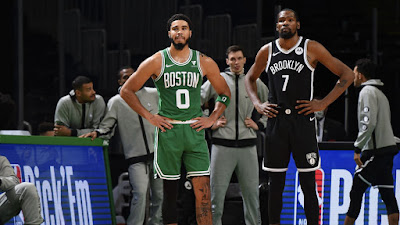 It's been a long season for Celtics forward Jayson Tatum, who's had to battle COVID and keep his team afloat, while still experiencing lingering effects.
Now heading into the playoffs without fellow All-Star teammate Jaylen Brown (season-ending wrist surgery), Tatum once again has to take the lead as he's coming off a 50-point performance to beat the Washington Wizards in the Play-In Tournament and get in as the No. 7 seed.
After finishing the regular season with a career-high average of 26.4 points per-game, Tatum faces yet another challenge of competing against the No. 2 seed Brooklyn Nets in the opening round of the postseason.
Superstar Kevin Durant gave Tatum high praise ahead of Saturday night's Game 1 at Barclays Center, after everything the Celtics' leading scorer has gone through this season.

"The best thing I've seen about JT is how he stays the same no matter what the lineup is," Durant told reporters Friday. "Guys are in and out. He had COVID. His running mate is out for the rest of the season. Kemba was in and out of the lineup. And he stayed solid."

While finishing his fourth season in the league with a career best in points, Tatum also concluded the 2020-21 campaign with improvements across the board with 7.4 rebounds, 4.3 assists, while shooting 45.9 percent from the field and 38.6 percent from 3-point range -- which definitely didn't go unnoticed by Durant.

"The way he plays the game, he never changes his style from scoring from the top of the key, to the post, from either side of the floor, adding passing to the game now," Durant said. "I feel like he has some blinders on and just focused in on developing and continuing to grow as a player, and that’s what I admire the most from afar.

"But he's learning more and more about NBA defenses, and as a young guy he's been through so much already. He's only going to get smarter, so I think at this point people have thrown everything at him and he's handled it pretty well."

Tatum, who replaced Durant (hamstring injury) as a starter in this year's All-Star Game back in March, appreciates the compliments from a player of that caliber, especially since he remembers attending Durant's basketball camp in hopes of being just as good as he is.

"I always envisioned when I took pictures with those guys that one day I would be in their shoes," Tatum said. "It's cool. Obviously I knew (Durant) pretty well and getting a chance to compete against him, knowing that he was a guy I really looked up to when I was in middle school, high school. It's cool to see those things kind of come around full circle."

Durant now 32, is still one of the league's elite players, while Tatum at 23 years of age is still coming into his own. A series win over the mighty Nets would go a long way when it comes to the obvious superstardom of the Celtics' wing.
For a full series schedule, click here.