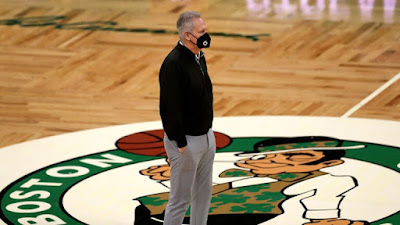 It has been a rough week for the Celtics, who have officially clinching the No. 7 seed after falling to the Cleveland Cavaliers Wednesday night for their fourth straight loss.
While its only been a few days since Jaylen Brown was ruled out for the season with a torn ligament in his left wrist, the Celtics at 35-35, find themselves in the "Play-In Tournament" with a fighter's chance to make it to the playoffs.
Despite how this rocky 2020-21 campaign ends for the Celtics, it appears the current roster will see some changes this offseason -- according to team president of basketball operations Danny Ainge.

"I think that we will definitely be looking to make some changes in the offseason," Ainge said Thursday morning during his weekly appearance on 98.5's Toucher & Rich. "Obviously can't go into any of those kind of details. But yeah, there will be changes. How significant? I don't know yet. We'll see."

After coming up two games short of an NBA Finals berth last fall, the obvious question on the minds of many Celtics fans is; how did this team end up here?

"Our team has been decimated with injuries and has underperformed," Ainge stated. "There's no doubt about it. And, you know, we're not as good as we thought we were. That simple."

Ainge defended Brad Stevens, the same way he has all season long, calling him a "fantastic" coach and that he's "getting better, not worse."

"The real issues are not Brad Stevens," Ainge said emphatically. "You can't just look at a coach and take his whole body of work throughout his whole coaching career and throw in this year and then make a judgment for crying out loud. That is idiotic."

Still, Ainge acknowledged that more than likely there's some sort of move or two made this summer, but it doesn't mean that any of the team's best players will be involved.

"The bottom line is our team hasn't been as consistent, hasn't been as healthy," Ainge said. "We definitely will need to make some changes. But I wouldn't say there's any needed changes of our best players."

Even though it seems like Stevens' job is safe for the time being and the core members of the roster such as Brown, Jayson Tatum and even Marcus Smart won't be shopped, it doesn't mean anyone is clear of criticism when it comes to the disappointing year that was 2021.

"I'm saying I blame everybody and I'm saying everybody is guilty of both of those – of playing great and the good games and bad in the bad game," he explained. "It's a collective team."

The Celtics have two games remaining against the Minnesota Timberwolves and New York Knicks this weekend before the play-in tournament begins on Tuesday.