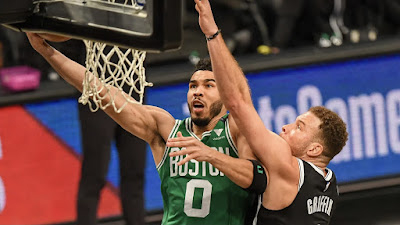 The Celtics missed a golden opportunity to steal Game 1 at the Barclays Center, as they fell to the Brooklyn Nets 104-93 and trail this best-of-7 opening round series 0-1.
Jayson Tatum struggled from the field, shooting 6-of-20 (1-of-4 from 3) for 22 points, while Marcus Smart scored 17. Kemba Walker ran into foul trouble early -- picking up his third midway through the second quarter -- only netting 15 points on 5-of-16 attempts from the floor.
Robert Williams chipped in a near triple-double with 11 points nine rebounds and nine blocks -- which broke a franchise record for the most swats in a playoff game since Kendrick Perkins and Robert Parish held that feat with seven.
When Williams was asked about setting a new franchise playoff record and had he ever blocked that many shots before, but obviously the Celtics young big didn't seem very enthusiastic following the loss.

"No, actually I haven't gotten this many blocks in a game ever. But it don't mean shit if we losing, man," said Williams in his postgame presser.

Kevin Durant finished with a game-high 32 points on 10-of-25 shooting and 12 rebounds to lead the Nets trio. Kyrie Irving had 29 points (11-of-20 from the field) and James Harden added 21 points, nine rebounds and eight assists to take Game 1.
The Celtics went ice cold on the second half, scoring only 40 points and shooting 36.9% on the night.

"You can guard these guys really well and you're still going to have to score," Boston coach Brad Stevens said in his postgame comments.

The Nets got off to a bad start, as the "Big-3" were held to a combined 5-for-20 from the field in the first quarter, missing all nine of their 3-point attempts. The Celtics took a 32-20 lead to start the second period.
Boston's 9-of-17 3-point shooting kept them in front the whole first half, while Joe Harris (10 points) hit Brooklyn's first 3 of the game in the last minute of the quarter, after missing the first 12 straight attempts, but they still trailed 53-47 at the break.
The Celtics scored two quick baskets to start the third quarter before the Nets' trio woke up to run off 18 unanswered points and grab their first lead and make it 65-57 with 7:16 left in the quarter.
A 10-4 spurt by Boston got them with three (73-76), but a Harden layup gave the Nets a 78-73 advantage heading into the final frame.
Williams' block on a step back Harden 3-pointer turned into an alley oop for the Celtics on the other end to make a three-point game to start the fourth. Boston wouldn't get any closer than that the rest of the way. At the 7:27 mark and the C's down three once again, the Nets used a 12-2 run to take a 94-81 lead.
With two minutes remaining, the Celtics had only managed to score nine points total before Durant was called for a Flagrant 1 foul on Tatum attempting a 3. While the C's All-Star hit all three free throws and Boston got the ball back, Walker immediately hit the team's first 3 of the second half and followed it with another made shot from behind the arc -- the only two made 3's for the Celtics in final 24 minutes -- but it was too little too late with the team down 101-91 with 1:19 left to play.

"Our competitiveness was right, our focus defensively was right for the most part," said Stevens. "We had some miscues, but not a ton and we just got to attack their switching better. They got a lot of long athletic guys out there and prideful individual defenders and they know how to play, so we've got to be better at manipulating actions to get what we want."

The Celtics will have a couple of days to re-group before Game 2, which is scheduled for Tuesday night. TNT will have the tip-off at 7:30 PM EST.

Robert Williams was one shy of the NBA playoff record for the most blocks in a game, which was 10 set by Andrew Bynum back in 2012