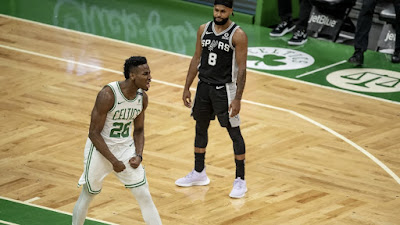 Celtics coach Brad Stevens has been known to show trust in his younger players over the course of his tenure in Boston.
While not unusual, Stevens also has no issues rewarding those that put in the work on and especially off the court. Such has been the case for rookie Aaron Nesmith, who has been on a tear recently, by not just playing regular rotation minutes but making an impact in clutch fourth quarter stretches as well.
Nesmith has been talking full advantage of Stevens giving him plenty of opportunity over the past 10 days and the C's coach is not surprised with the results either.

"I'd say the part that has been the most impressive to me over the past two games has been the fact that a guy can go from not playing that much from a conditioning standpoint, and play those long stretches as hard as he did," Stevens said in his postgame comments following the Celtics' win over the San Antonio Spurs. That speaks to his hard work ethic on off days, it speaks to his preparation throughout the season. And he's getting more comfortable. He still has a bunch of plays where he looks like he's a step behind the play, but he makes up for it because of his effort."

In his last five games, Nesmith is shooting 63.6% from the floor and 60% from deep, while increasing his scoring to 15.6 points per contest over the past three outings off the bench.
Nesmith finished with 15 points, nine rebounds, three steals and three blocks in Wednesday win over the Charlotte Hornets, to then followed that up with a new career-high of 16 points and six rebounds in Friday's 32-point comeback rally over the Spurs -- playing the entire fourth quarter in both games and overtime against San Antonio. He had another strong performance in Sunday's 129-119 loss to the Portland Trail Blazers, with 16 points on 6-of-7 shooting and a perfect 4-of-4 from 3.

"I'm really happy for him, and we needed that kind of jolt from someone, Stevens said in his postgame presser on Sunday. "And it's been great that he's been able to give it to us."

Despite the loss to the Blazers, the Celtics rookie spoke about how his confidence never faltered throughout the season, which is a direct result of being patience and staying ready by executing the necessary preparations on days off.

"Yeah, just sticking with it, continuing to work, and continuing to do the work," said Nesmith. You know, the early mornings, still waking up every morning and getting to the gym and getting extra shots up, consistency. Even if it's not falling, I'm gonna keep shooting. So as long as I keep doing that and keep the same mindset, they'll continue to fall."

For the month of April, Nesmith shot 50% from the floor and 40.9% from 3-point range in 12 games played. The Celtics were 8-4 during what has easily been the best stretch of his rookie year so far this late into the season.