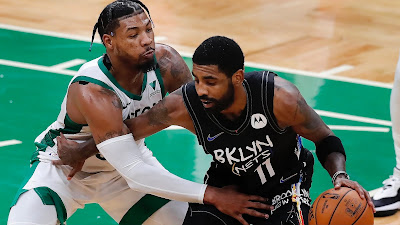 On the heels of Kyrie Irving's comments earlier this week about Celtics fans yelling racist remarks, Marcus Smart let reporters know that he's heard racial slurs from the crowd at TD Garden before.
Following Game 2 in Brooklyn, Irving was asked about playing in front of fans in Boston for the first time since signing with the Nets back in the summer of 2019.

"It's not my first time being an opponent in Boston," Irving said postgame Tuesday night. "So I'm just looking forward to competing with my teammates and hopefully we can just keep it strictly basketball, there's no belligerence or any racism going on -- subtle racism and people yelling shit from the crowd. But even if it is, that's just the nature of the game, and we're just going to focus on what we can control."

"I'm not the only one who could attest to this," Irving added when ESPN's Rachel Nichols asked if he had experienced racism in Boston before. "It is what it is."

Smart defended his former Celtic teammate, saying that Irving wasn't off base in his comments about fans towards visiting teams at the Garden.

"I've heard a couple of them," Smart said during his media presser on Thursday. "It’s kind of sad and sickening. Even though it's an opposing team, we've had guys on your home team that you're saying these racial slurs and you expect us to go out here and play for you. It's tough.
"We just want everyone to be respectful, on and off the court. We want that same respect that we give to fans and the crowd to come out here and put on a good show and not to interfere in that type of manner with them. We expect the same in return from us."

Last year, Smart detailed an incident in The Players' Tribune that left him shocked while leaving the TD Garden one night. Smart saw a woman and a child crossing the street just as cars started to drive. Smart waived and yelled at the woman -- who was wearing an Isaiah Thomas jersey -- to quickly get out of the street.

"I figured she'd be cool, Smart wrote in his story.

But instead, the woman turned and screamed at Smart, calling him a "f***ing n-word" in front of the child she was with.

"Dozens of times since that run-in, I've prayed for that child who was clutching his mom's hand that night," Smart wrote. "For his future. And for all the kids out there being brought up to hate rather than to love."

During his weekly appearance on 98.5 The Sports Hub, Danny Ainge says he's "never heard any of it," when it comes to racism in Boston.

"I think that we take those kinds of things seriously," Ainge said Thursday morning on Toucher & Rich. "I never heard any of that from any player in my 26 years in Boston. I never heard that from Kyrie, and I talked to him quite a bit. I don't know. As far as I'm concerned, we're just playing basketball."

While Jayson Tatum believes Irving comments were more about referencing the league as a whole, he did point at the incident at Madison Square Garden where a Knicks fan spat on Trae Young on Wednesday night.

"Obviously, there are going to be chants against him, but I guess he was just talking about keeping it basketball, which I think most people should understand," Tatum said about Irving during his Thursday presser.

Nets forward, Blake Griffin, was asked about Irving's comments and mentioned that he has heard racial remarks across NBA cities.

"Never played a playoff game in Boston," Griffin said to the media on Thursday. "So it's a little different regular season. So, hopefully not. Like I said, I have a lot of respect for the fans in Boston: They know the game, they're loud, they support their team. But you just hope it stays like that and doesn't cross any lines. But again, I’m not going into it with that expectation, because I haven’t had that experience and it's just kind of how I operate."

Game 3 will tip-off tonight at TD Garden in front of approximately 5,000 fans and that's expected to increase to "near full capacity" come Sunday for Game 4, as the Celtics currently trail in their best-of-7 series 0-2.
.