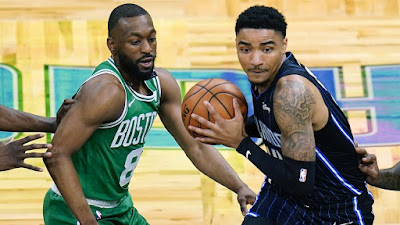 It was the first wire-to-end blowout for the Celtics in a while, as they trounced the Orlando Magic at the Amway Center 132-96 Wednesday night.
Kemba Walker led all scorers with 32 points on 11-of-18 shooting and 6-of-9 from deep after missing the last four games with a oblique strain. It was the third time this year that he's tied his season-high of 32 and despite the layoff, Walker showed no signs of rust.

"He had good burst and looked good," Boston coach Brad Stevens said. "Injuries are no fun, but you can tell the guys who've had time off their legs because you can see the different burst. (Walker) was great."

Jayson Tatum continued his offensive tear, finishing with 27 points on 10-of-22 from the field and Evan Fournier added 18 points in his first return to Orlando since being dealt over a month ago. Rookie Payton Pritchard chipped in 14 points, including going 4-of-6 from 3-point range to help the Celtics pull even with the Miami Heat for sixth place at 35-31.
The Celtics were playing without Jaylen Brown (right ankle sprain), Tristan Thompson (left pectoral strain) and Romeo Langford (concussion protocol).
Dwayne Bacon and former Celtic Moritz Wagner each scored 20 points for Orlando, while Mo Bamba added 19 points, 15 rebounds and four blocks for the 21-45 Magic -- who got their two game win streak get snapped.
Boston opened up the game with a 21-6 run, which blossomed to a 63-45 lead at the break and 18 first half points by Walker.
The next 24 minutes was much of the same, as no Celtics starter played more than 31 minutes and the team hit 21-of-45 3-pointers -- making it the six time this season the C's have made at least 20 3's in a game and the second against Orlando.
While Boston shot 53.1% from the field, they held the Magic to only 38.8% shooting, 24% (6-of-25) from behind the arc and also forced 19 turnovers.
The 36-point victory was the largest margin away from the TD Garden this year with six games remaining.
The Celtics travel to Chicago to take on the Bulls (26-39) Friday night, ESPN will have the tip-off at 7:30 PM EST.

Boston handed out 28 assists on 51 made baskets, while Orlando had 13 on 33 made shots. The Celtics outscored the Magic 50-42 in the paint, while they lost the battle at the free throw line going 9-of-12 and Orlando was 24-of-28 from the charity stripe.
Tacko Fall made a brief five-minute appearance late in the fourth quarter to some loud cheers, the 7-foot-5 former University of Central Florida alum recorded two points, three rebounds and four blocked shots.