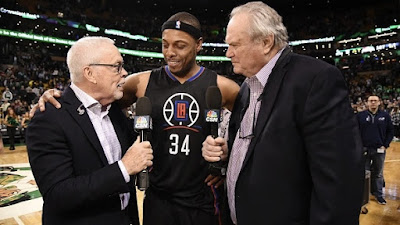 Paul Pierce will officially become the last of the Celtics new "Big-3" to be inducted into the Naismith Basketball Hall of Fame, after being named a finalist earlier this year.
"The Truth" was part of the 2021 Basketball Hall of Fame induction class on Sunday less than 24 hours after Kevin Garnett was enshrined at the ceremony for the 2020 class. In addition to Pierce, Celtics icon Bill Russell will be inducted as a coach and TV play-by-play legend Mike Gorman is this year's recipient of the Hall's Curt Gowdy award.
Pierce, the No. 10 overall pick out of Kansas in 1998, spent 15 years with the Celtics and is No. 2 on the franchise's all-time scoring list with 24,021 points. After nearly a decade of not getting much support to help compete for titles, Pierce led the Celtics to an NBA championship in 2008 alongside Ray Allen and Garnett.


The Celtics legend was a Finals MVP and the NBA's 16th all-time leader in scoring, while making 10 All-Star Game appearances. Pierce also played for the Brooklyn Nets, Washington Wizards, and Los Angeles Clippers before signing a one-day contract with the Celtics in 2017 and retiring after 19 seasons.
His Celtics counterparts; Allen was inducted in 2018 and Garnett was part of the 2020 class that was enshrined Saturday.
Russell was named the Celtics head coach in 1966, making him a player-coach for his final three seasons as a player in Boston and the first ever Black coach in North American professional sports. Russell won two championships as a player-coach for the Celtics. He stepped down from the head coach role once he retired as a player in 1969. Russell also went on to coach the Seattle Supersonics from 1973-77 and the Sacramento Kings a decade later during the 1987-88 season.
The Celtic icon was inducted into the Basketball Hall of Fame as a player in 1975, but didn't accept Hall of Fame ring until 2019.


Gorman, who's NBC Sports Boston's TV play-by-play announcer and voice of the Celtics for the last 40 years, has been named as the 2021 recipient of the Naismith Memorial Basketball Hall of Fame's Curt Gowdy award -- which is given annually to an outstanding basketball writer or announcer.

Congratulations Mike! Mike Gorman is receiving the 2021 Curt Gowdy media award from the Hall of Fame. A true legend and deserving of this great honor. pic.twitter.com/y9vOhnFBDV


ESPN's TV play-by-play Mike Breen was the Gowdy award recipient for 2020, as he also calls New York Knicks games for the MSG Network -- was honored during the season finale between the Celtics and Knickerbockers on Sunday afternoon.

"It's a long list," Gorman said during yesterday's Celtics broadcast. "The more I could think that somebody wanted to put me in that group, the harder it is to talk about it."

Gorman for 39 out of his 40 years of calling Celtics games with his broadcast partner and Hall of Famer Tommy Heinsohn, who passed away before the start of the 2020-21 season this past November.

"Roughly 2,800 times I sat down with Tommy to broadcast a game. Every time it was special," Gorman wrote via Twitter. "HOF player… HOF coach… HOF partner. Celtics Nations has lost its finest voice. Rest In Peace, my friend. It has been a privilege of my professional life to be the Mike in Mike & Tommy"

Celtics president of basketball operations Danny Ainge congratulated Pierce, Russell and Gorman for their accomplishment and being inducted into the Hall of Fame, dubbing the trio the "new Big-3."