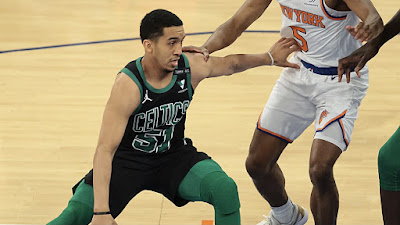 With the Celtics already securing the No. 7 seed in the Eastern Conference "Play-In Tournament," the New York Knicks took advantage of Boston resting their best players in a 96-92 win at Madison Square Garden Sunday afternoon to officially clinch the No. 4 seed in their regular season finale.
Other than Jaylen Brown being out after having surgery to repair a torn ligament in his left wrist this past week, the Celtics were also without Evan Fournier(knee), Marcus Smart (calf), Jayson Tatum (ankle), Tristan Thompson (pectoral strain), Kemba Walker (neck) and Robert Williams (turf toe).
In a starting lineup that included rookie Payton Pritchard and Luke Kornet and Semi Ojeleye -- who scored a whooping 15 points combined -- the Celtics got more production from their second unit to try and prevent the Knicks from clinching homecourt advantage in the first round of the playoffs.
Jabari Parker led Boston with 18 points on 6-of-10 shooting and seven rebounds off the bench after playing for only the second time in the last 10 days. Tremont Waters scored 17 points, dished out five assists and grabbed five rebounds in 25 minutes. Romeo Langford added 14 points for the Celtics, who have lost six of their last eight to wrap up the 2020-21 campaign at 36-36.

"It was our last regular-season game and we just wanted to go out there and fight, do the best we can and show that we're still fighters," said Waters in his postgame presser.

RJ Barrett finished with a game-high 22 points, while All-Star Julius Randle netted 20 points to go along with seven rebounds and seven assists. Alec Burk chipped in 17 off the bench and Reggie Bullock had 16 for the Knicks (41-31) to conclude their first winning season since 2013.
Boston used a 15-0 run to cut a 21-point deficit down to three in the final minutes of the fourth quarter before Massachusetts native Nerlens Noel had back-to-back blocks and Randle hit a free throw to stop the bleeding and protect their lead.
The Celtics led 24-23 after one before the Knicks broke a 35-35 tie in the second period in the middle of a 19-4 spurt to create some distance. Boston was held to just 15 points, while New York used another 12-0 run to take a 54-39 advantage at the half.
Neither team shot particularly well as both hit just over 40 percent from the field, but the Knicks were 13-of-27 from behind the arc and the Celtics were only 11-of-41 from deep.
New York will face the Atlanta Hawks in the first round of the playoffs as the No. 4 - No. 5 matchup and the Celtics host the No. 8 Washington Wizards (34-38) on Tuesday night in the play-in game for an opportunity to officially clinch the No. 7 seed.

"We'll be prepared," coach Brad Stevens said. "I mean, I have no doubt about that."

TNT will have the tip-off from TD Garden beginning at 9 PM EST.

Game Notes:
Celtics won the battle of the glass 46-41 and handed out 19 assists on 35 made baskets to the Knick's 16 dimes on 34 made shot attempts. Boston also outscored New York in the paint 40-26 and their second unit outscored the Knickerbockers' bench 50-36.