Could Robert Williams be Celtics' x-factor vs Nets in this series? 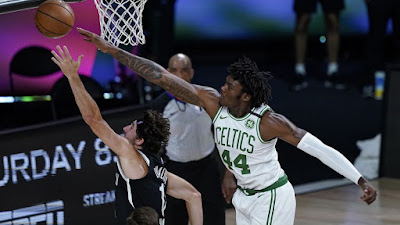 Despite a nagging turf toe injury, Celtics big man Robert Williams had quite an impact in Game 1, dominating the Brooklyn Nets on both ends of the floor.
While missing the last four games of the regular season and re-aggerating his injury in the Play-In Tournament win over the Washington Wizards, Williams proved to be the Celtics x-factor in Saturday's 104-93 loss to open up this first round best-of-7 series.
In 23 minutes of action off the bench, Williams finished with a near triple-double of 11 points (5-of-8 field), nine rebounds and nine blocks -- one shy of the NBA playoff record of the most swats in a game and the most since Andrew Bynum back in 2012 with 10.
Though Williams did break a Celtics record for the most blocks in a postseason game, passing both Kendrick Perkins and Robert Parish (7) in the process, the third year center is still dealing with turf toe and it all seemed for nothing even after notching a career-high in blocks.

"You know it's just a delicate situation, said Williams of the toe injury in his postgame presser. "It's really pain tolerance, you feel me? And no, actually I haven't gotten this many blocks in a game, ever. But don't mean shit if we lose, man."

Even Nets' coach Steve Nash calling Williams' performance in Game 1 "terrific" could be viewed as an understatement, since Brooklyn shot 41.7% from the floor, including being held to 8-of-34 from 3-point range -- a far cry from their normal 49.4% overall shooting, 39.2% on 3's and 118.6 total points scored per-game.

"Obviously, I think he had nine blocks, challenged shots, and is an offensive rebounder," Nash said. "So a big part of the game. Played a big role for them. And yeah, it is what it is. We've got to be careful on our decision-making when we’re around him, but this is a good challenge for us to figure out ways to not allow him to have such a big impact."

If the Celtics are going to have a shot to make this a competitive series, Williams is going to have be the that x-factor, especially on the defensive end to disrupt James Harden's step-backs and Kyrie Irving driving to the rim.

"His timing is amazing," said Irving in his postgame comments after being the victim of Williams' first block. "It's great to see a big that’s active in our game, and he challenges you at the rim every single time. So it’s just going to test our IQ for the rest of these games."

Williams practiced on Monday which is good sign for the Celtics come Game 2 and possibly beyond, before the series shifts to Boston in front of increased crowd capacity at TD Garden later this week.

"Rob's doing pretty well," Coach Brad Stevens told reporters after Monday's shootaround. "We're trying to keep him off his feet as much as possible on these days away from the game. But he was dressed and went through more of the walkthrough portion of practice."

According to Williams' doctor, as long as the 23-year old center can tolerate the pain of not only turf toe but also an hyper-extended toe in his left foot, he can play.

"It's going to be pain there regardless; as much pain as you can take," Williams said after Game 1. "When I'm out there, my adrenaline, the excitement of the game, kind of overtakes the pain, so I use that."

Though Williams has struggled to stay healthy, he averaged 8.0 points, 6.9 rebounds and 1.8 blocks (sixth in the league) in 52 games during the regular season, while shooting 72.1 percent from the field.
Game 2 is scheduled for Tuesday night, as TNT will have the tip-off at 7:30 PM EST.