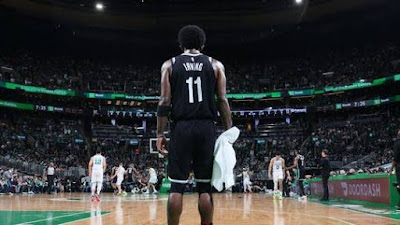 Kyrie Irving got the last laugh on Sunday night when Game 4 was all said and done, as the Celtics fell to the Brooklyn Nets 141-126 and trail their best-of-7 series 3-1.
With a near full capacity crowd of over 17,200 fans at TD Garden that booed each time he touched the ball, it didn't seem to faze Irving in the least after struggling offensively on 6-of-17 shooting two days prior in Game 3.
The Nets' All-Star point guard finished with 39 points (11-of-24 from the field and 6-of-12 from 3-point range) and 11 rebounds before an unruly fan tossed a water bottle from the stands as Irving was walking off the court when the game concluded, nearly hitting the former Celtic.
This comes on the heels of Irving's comments about Celtics fans and similar incidents happening around the league over the past week. Though the 21-year old fan wearing a Kevin Garnett jersey was arrested and given a lifetime ban, Irving doesn't agree that's enough when it comes to "underlying racism and treating people like they're in a human zoo."

"People feel very entitled out here," said Irving, who played for the Celtics from 2017-19.

"As a Black man playing in the NBA, dealing with a lot of this stuff, it's fairly difficult. You never know what's going to happen," he said during his postgame presser. "It's just unacceptable for that stuff to be happening. But we move on."

Kevin Durant once again led the Nets big-three with 42 points on 14-of-20 from the field, while James Harden added 23 points and playoff career-high 18 assists. Bruce Brown, who's a Boston native, chipped in 14 points to help Brooklyn get within one win of advancing to the semifinals for the first time since 2014.
The combined 104 points scored by Durant, Irving and Harden tied an NBA record in the postseason for the most by three teammates -- which was set by Celtics trio of John Havlicek, Jo Jo White and Dave Cowens in 1973 and matched in 1986 by Dominique Wilkins, Randy Whitman and Spud Webb.
Jayson Tatum followed up his 50-point Game 3 performance with 40 points scored (10-of-22 shooting), becoming the first Celtic to net at least 40 in two straight playoff games -- but it wasn't enough to even the series.
Marcus Smart (six rebounds, nine assists) and Evan Fournier each had 16 points apiece, while Jabari Parker contributed with 10 points and six rebounds off the bench for Boston.
The Celtics jumped out a 21-13 lead to start the first quarter before getting outscored 20-13 to only be up one heading into the second.
Landry Shamet hit a go ahead jumper 19 seconds into the quarter, putting the Nets up for good. Meanwhile Tatum went scoreless the rest of the half after scoring 14 points in the first 12 minutes. The Celtics All-Star also picked up a technical foul with 4:45 left in the period, as Brooklyn took a 73-60 advantage into the break.
Irving's put-back dunk at the 7:10 mark in the third, put the Nets up 88-68 and they pushed the deficit to 110-83 -- the largest of the night with 1:20 left to play in the quarter.
With the Celtics trailing 121-95 with 9:36 remaining, Tatum was subbed out what seemed like for the last time, but the Nets trio played the entire fourth period and coach Brad Stevens inserted Tatum for the final 6:16, as it was too little too late -- scoring eight of his 40 to help the Celtics finish with a 35-point total in the final frame.
Despite Boston scoring 125 total points in each of the last two games, they couldn't overcome the absence of Kemba Walker (knee) and Robert Williams (ankle), who could have helped dictate some of the offense to take the pressure off of Tatum and on defense to limit some open looks by the Nets.

"You know, I thought we did a good job in a couple of these other games of limiting the feel good rhythm of an offense. Today after they made those tough shots, I thought we overreacted and and rightfully so, said coach Brad Stevens. "I mean, I think obviously it's hard to watch those guys go isolation and it's hard to play one-on-one. They do a really good job when you run and jump them when you trap them. We got hit by a good punch and we need to be ready to deliver one on Tuesday."

The Celtics conclude the month of May with a 4-9 record as they head back to Brooklyn on the brink of elimination, Game 5 is scheduled for Tuesday night. TNT will have the tip-off at 7:30 PM EST.