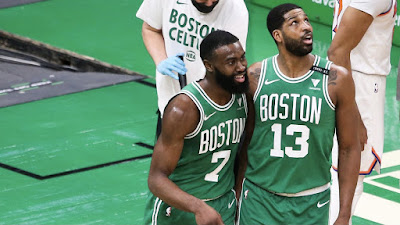 The Celtics announced that Jaylen Brown (sprained right ankle), Tristan Thompson (left pectoral strain) and Romeo Langford (concussion protocol) are all out tonight against the Orlando.
Brown was already listed as out following Tuesday's practice, which he didn't participate in, following a collision with Jayson Tatum in the final minute of the Sunday's loss to the Trail Blazers. Both were sent to the locker room, while Tatum was declared good to go, Brown is "very much day-to-day after that," per Brad Stevens.

Thompson has been pretty healthy since returning from a 13-game absence after entering the league's health and safety protocols, but there is no word on how long the veteran could be out for. Meanwhile, Langford has entered concussion protocol after bumping his head in practice and woke up this morning with a headache, according to Stevens.
It was also announced that Tatum and Kemba Walker (oblique) both went through a full practice Tuesday and they will be available to play, as the Celtics have seven games remaining in the regular season.
Other than the Magic (20-44) Wednesday night and the Bulls (26-38) on Friday, they'll have a two-game showdown against the Heat at TD Garden on Sunday and Tuesday. Boston is currently a half game behind sixth-place Miami in the Eastern Conference standings, as both teams look to avoid the Play-In Tournament.