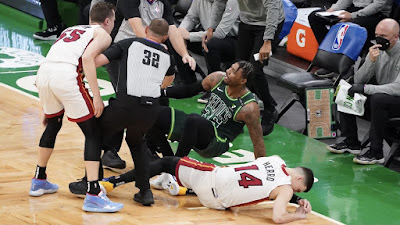 The injuries keep piling up for the Celtics, who have lost three in a row with three games to left before the end of the regular season. Boston will be without Kemba Walker, Robert Williams and Marcus Smart tonight against the Cleveland Cavaliers.
While Jaylen Brown is out for the rest of the year, Walker is still not playing back-to-backs, Williams (turf toe) has no definite return date and Smart will also not play due to a contusion in the same right calf he injured back in January.


The Celtics are currently in seventh place at 35-34 and three-games behind the sixth seeded New York Knicks (38-31), but ahead of the 33-36 Charlotte Hornets (eigth) by two games in the loss column. With the likely hood that the "Play-In Tournament will be the C's fate, Smart could be just getting some much needed rest before the team travels to Minnesota Saturday and then Madison Square Garden on Sunday.
Tip-off against the Cavaliers from Rocket Mortgage Fieldhouse is at 8 PM EST.