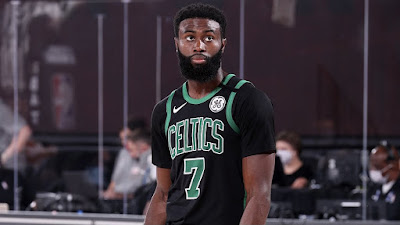 It was an emotional few days with the topic of conversations were surrounding racism in the city of Boston ahead of the Celtics hosting the Brooklyn Nets in Game 3.
While Kyrie Irving would be playing in front of C's fans for the first time in over two years, the All-Star guard hoped fans at TD Garden wouldn't show "subtle racism."

"I'm not the only one who can attest to this," Irving said following Game 2 while putting his hands up. "It is what it is."

Celtics president of basketball operations Danny Ainge and coach Brad Stevens reacted to Irving's comments, along with former teammates Marcus Smart, Jayson Tatum and of course Jaylen Brown -- who hadn't spoken to to the media since having season-ending surgery on his left wrist.
On Friday, Brown addressed the media during a Zoom call prior to the Celtics' Game 3 win. Here's what the Celtics guard had to say regarding Irving's comments and systemic racism in Boston.

"I saw things floating around with Boston and the topic of racism," Brown said. "People around me urged that I should share my perspective. I have not talked to anyone — Kyrie [Irving], Marcus [Smart] or Danny Ainge — about my thoughts or my perspective, but I do think it's a good conversation. I think that racism should be addressed, and systemic racism should be addressed in the city of Boston, and also the United States.
"However I do not like the manner it was brought up, centering around a playoff game. The construct of racism, right? It's used as a crutch or an opportunity to execute a personal gain. I'm not saying that's the case. But I do think racism is bigger than basketball, and I do think racism is bigger than Game 3 of the playoffs.
"I want to urge the media to paint that narrative as well. Because when it's painted in that manner, it's insensitive to people who have to deal with it on a daily basis. The constructs and constraints of systemic racism in our school system, inequality in education, lack of opportunity, lack of housing, lack of affordable housing, lack of affordable health care, tokenism, the list goes on.

"So, I recognize and acknowledge my privilege as an athlete. Once you get to the point where that financial experience overtakes the experiences people deal with on a daily basis, I want to emphasize that as well.
"I understand the frustration right now. I've seen what’s going on in sports and in sporting arenas with the two incidents obviously with Russell Westbrook and Trae Young, and I'm pissed, to be honest. I don't think we should have to put up with that, and I don't think that's OK, by any means necessary. But when I look in the media and I see those incidents attached to a frame of racism, yes I think it's important to address those situations, but if the topic is racism, I think that those incidents don't compare, or those belligerent comments don't compare to what systemic racism is currently doing in our community and has done in the past.
"So, it's important to frame it in that context. I think that not every Celtics fan — I know that every Celtics fan in our arena is not a racist. We have people of all walks of life, ethnicities, colors, that are diehard Celtics fans. So I think painting every Celtics fan as a racist would be unfair.
"However, Boston, we've got a lot of work to do, no question. Incarceration rate is ridiculous, the wealth disparity is embarrassing, the inequality in education specifically in Boston public schools needs to be better. There's a lack of resources there, lack of opportunity. The tokenism here in Boston needs to be addressed as well.

"But if we're going to talk about it and that's what the media is going to bring up, I think a sporting arena, things might exist. But in the real world things exist to far different extremities. So I definitely wanted to share my perspective.
"This is my opinion, of course, and people can challenge that. I definitely think, Boston, we've got a lot of work to do."