Why Jayson Tatum's Play-In performance proves Celtics can compete vs. Nets in first round 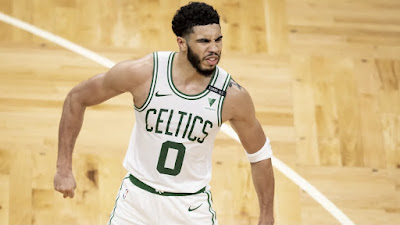 Jayson Tatum scored 23 of his 50 points in the third quarter of the Celtics win of the "Play-In" game over the Washington Wizards on Tuesday night.
While Boston was without Jaylen Brown after undergoing surgery on his wrist last week, Marcus Smart twisted his ankle in the first quarter and Robert Williams III had to exit in the third due to his turf toe, Tatum led the way past the Wizards; who were winners of 15 of their last 20.
The Celtics 22-4 run to start the second half propelled a double-digit lead that they didn't give up on the way to a 118-100 victory and a playoff berth for the seventh straight postseason.

"I wanted to get to the playoffs," Tatum said after the game. "And I ain't wanna lose to Brad (Beal) and hear about it for the rest of my career either."

Tatum went 14-of-32 from the floor and 5-of-12 from deep, to go along with eight rebounds, four assists, two blocks and a steal. Despite the Celtics shooting only 39.6 percent for the game -- the first and only win all season shooting under 40 percent -- Boston did take advantage of easy buckets while staying aggressive and also getting to the charity stripe.

"Especially in the playoffs, the easier a bucket can be, especially attacking the rim early, it opens up so much for himself but also for us as a team," Tristan Thompson said during his postgame comments. "For him (Tatum), he had it rolling, he's a stud. We know what he can do, so he has to set the tone early for us."

The Celtics' All-Star mixed it up on offense, keeping the Wizards' defense guessing for most of the game. Tatum was also a perfect 17-of-17 from the free throw line.

"I just wanted to be aggressive tonight," he said. "We got them in the bonus early in a couple of those quarters so once I'd seen that, I was just trying to put the pressure on the defense in a rush."

With chants of M-V-P raining down from the 25-percent capacity crowd at TD Garden, even Wizards coach Scott Brooks could agree with that notion that Tatum is well on his way to being a future NBA most valuable player.

"He's right about that," said Kemba Walker, who finished with 29 points, when told about Scott's take on Tatum.

"He was unbelievable," Walker said to reporters. "It ain't new to me. I've been watching this guy put in this kind of work over the last year or so, year or two. So I'm here for the ride. It's fun. It's always exciting to see him go off the way he go off. So we're going to need that throughout this whole run."

As the Celtics prepare to face the mighty Brooklyn Nets in the first round of the playoffs, which tips-off on Saturday night, Tatum's offensive performance mixed with the team's defense could make for an interesting series.
Still, effort will only get you so far, but for veterans like Walker and Thompson who are more than willing to let a young and upcoming star like Tatum lead by example, it's clear the 23-year-old Celtics forward doesn't let any outside noise get to his head.

"I don't really get caught up in those who think I'm a superstar and those that don't," Tatum said. "What does that really mean? I know that, my teammates, I've earned their respect. I've earned the respect of the guys I've played against and the coaches. I believe in myself, and that's all that matters."