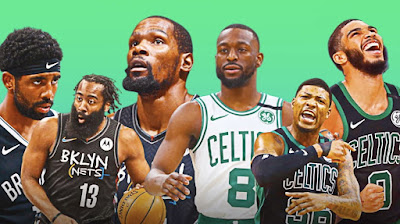 Led by Jayson Tatum's 50-point performance in the Play-In game against the Washington Wizards Tuesday night, the Celtics earned a first-round matchup with the Brooklyn Nets, who have championship expectations led by their "Big-3."
Once Jaylen Brown received wrist surgery, the team's chances at making a deep playoff run took a big hit, as the Celtics losing five of their last six games, pushed them into the Play-In Tournament.
With one of their key defenders out, the biggest concern for the Celtics in this series is how they'll contain Brooklyn's superstar trio of Kevin Durant, James Harden and Kyrie Irving. Knowing his team has a big challenge ahead of him, Marcus Smart still believes in his teammates' ability to compete.

"We know the odds are against us. We know what we're up against. This isn't our first time being up against a goliath and being underdogs," said Smart following practice Friday afternoon. "We just have to come out there and play. All the cards on the table, no holding back. We have nothing to lose."

Boston still has some capable scorers on their roster, but facing a team as loaded as the Brooklyn Nets will be a huge challenge for a team that has struggled with defense and consistency all year.
Will Kemba Walker and Jayson Tatum be able to make it a competitive series, or will the Nets run all over a team filled with question marks on defense? I dive into that and more in a first round series that will feature Kyrie Irving’s return to Boston in front of fans for the first time.
Who Will Contain Net's Big 3?
This is the same question every team in the NBA will have to answer this postseason, as the Nets' trio have dominated when on the court together. Although injuries have limited Kevin Durant, James Harden, and Irving to playing only eight games together this season, their elite scoring will still be hard to overcome.
That poses the obvious question regarding the Celtics in this series: who will be able to slow down Brooklyn’s superstars?
Marcus Smart will likely switch around on the defensive end as the Celtics' best remaining defender, but the team will have to find ways to collectively slow down the Big 3. That doesn't mean they'll find success as it will be a big task for a struggling defensive team, but others will need to step up defensively to at least slow down some of Brooklyn's key players.
Whether that means more minutes for Semi Ojeleye or Payton Pritchard, who have been aggressive on the defensive end, Brad Stevens will have to get creative with his lineups to find better results against the Nets' juggernaut team.
Should Harden have an off night shooting, he'll still be able to use his passing as a weapon. Although he only played in 44 games this year, Harden finished with 10.8 assists per game — something the Celtics will have to keep in mind. Should Irving and Durant still have strong offensive performances, it should be enough to outlast Boston on any given night.
The Celtics' defense will have their hands full keeping up with three of the league's best players, which is why Evan Fournier believes his team will need to give it everything they can to make life difficult for the Nets.

"When you play the best teams in the NBA, you have to compete with them. You have to show them that everything they're going to get is hard and that it's going to be a long series," said Fournier in his press conference today.

Is Jayson Tatum enough to make it a competitive series?
No one can question Tatum's offensive game as he took a big leap this season averaging a career-high 26.4 points per game. He's also added three 50 point games this year — showing his ability to carry the Celtics offensively if needed -- just look back to their play-in game against the Wizards on Tuesday night.
While Tatum has had strong offensive performances this season, the biggest concern in this series will be whether he'll be able to make it a competitive series by himself if others have tough shooting nights. He'll need a lot of help from Evan Fournier and Kemba Walker to keep up with the Nets' superstars, but there hasn't been a lot of production from their bench which could spell trouble for Boston.
Likely being double-teamed frequently in this series, Tatum will have to adjust and be more of a facilitator at times. He's shot poorly from the field multiple times this season with teams narrowing in on him defensively and will need to avoid that if the Celtics want to make it a competitive series.
Tatum's offense will carry the Celtics' offense at times, but considering how quickly the Nets can score, it seems unlikely he can do it himself. It will be tough for Boston to make it a long series shorthanded, especially considering their lack of depth.
Celtics: Players to Watch -
With the odds against them, the Celtics know they'll need to play their best basketball on a nightly basis to extend the series. That means some of the role players will need to step up, especially after Brown's injury.
Although he hasn't been the most consistent offensive threat this season, Payton Pritchard has shown flashes of being the lead scorer off the bench and will certainly need to do more. After a rough start to his rookie year, Aaron Nesmith has picked up his play of late and will need to shoot at a high level to neutralize the Nets' scoring runs. Boston will also need more production from their bigs, depending on Robert Williams' health, as the Nets with Deandre Jordan, Blake Griffin, and Nicolas Claxton could give the Celtics some problems down low.
Most importantly, Walker's production in this series will be one of the main storylines to monitor, as his up-and-down season is reminiscent of the Celtics' inconsistent season. Walker has shown he's capable of taking over offensively and has been aggressive drawing charges on the defensive end. However, his scoring will need to fuel the Celtics' offense at times when Tatum is out of the game. He's their only remaining star outside of Tatum on the roster, and will need to be at his best all series to prevent the Celtics from being dominated.
While he's also been inconsistent this season, Fournier will be Boston's wild card in this series, as his shooting could single handedly carry the offense in stretches. He's shown at times he can catch fire quickly, but other times he can’t seem to find the bottom of the net. Assuming the No.3 -- 4 scoring load in this series, Fournier will be another player to watch for a team that will need another offensive weapon.
Tatum will get his buckets, but it will come down to whether Walker is playing at an elite level and if the Celtics' supporting cast can step up.
Prediction:
The Celtics had a small chance of upsetting the Nets going into the series even if Brown was healthy, but now that all the offensive load will be placed on Walker and Tatum, it's unlikely Boston can complete that feat.
Brooklyn is far too deep with players like Griffin, Landry Shamat, Jeff Green, and Bruce Brown supporting their strong starting unit. Can't forget about Joe Harris, who is a lethal shooter and will receive plenty of open looks with all the attention being drawn on the Big 3.
If the Celtics have any chance of making the series competitive, they'll need more of Tatum's heroics and for Walker to get back to scoring 25--30 points a night. If they had Brown still in the mix, they'd have a much better chance, but their front court and bench are too much of a question mark to overcome the Nets' offensive threats.
Don't be surprised to see Boston steal a game if one of their stars have a big night, but with Brooklyn's eyes set on a championship, the Celtics will likely be heading into the offseason, where they'll look to add an infusion of talent to compete with the East's elite next season.
For a full series schedule, click here.