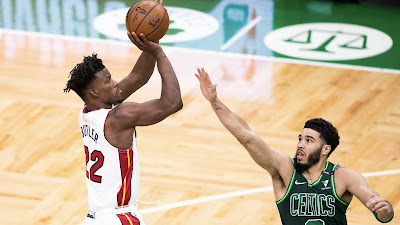 Barely 24 hours after news of Jaylen Brown being out for the season with a torn ligament in his left wrist, the Celtics found themselves in a unique situation, but couldn't capitalize -- falling to the Miami Heat at TD Garden 129-121 Tuesday night.
Kemba Walker scored another season-high 36 points on 14-of-27 shooting, to go along with seven rebounds and four assists to lead the Celtics, who have now lost three in a row and are on the brink of a spot in the "play-in tournament"

"It's a pride thing," Walker said during his postgame comments. "Individually, we've all got to look into the mirror and say: 'Are we giving everything we've got?' And to be honest, we're not."

The Celtics are three-games back of the Heat and Atlanta Hawks, who are tied for the fifth seed at 38-31 and have now lost the tie-breaker to both teams with three-games left in the regular season.

"When you have an opportunity to still make the postseason, you can't complain about that," Walker added.

Jayson Tatum added 33 points (12-of-21 shooting, 5-of-8 from 3), eight rebounds and six assists. Evan Fournier finished with 20 points (4-of-7 on 3's), eight assists and Marcus Smart chipped in 10 points for the seventh place Celtics (35-34).
Other than Brown not being in the lineup, the C's were also without Robert Williams (turf toe on his left foot) in the middle for the third straight game; being forced at times to play small.
Tyler Herro notched a double-double of 24 points and 11 rebounds off the bench to lead six Heat players recording double-digits in points. Duncan Robinson and Bam Adebayo each scored 22 points a piece, while Kendrick Nunn netted 18 points for Miami -- who clinched a playoff berth and have won 10 of their last 13.
Both teams showed a sense of urgency to start the game after the Heat pulled out a 130-124 win on Mother's Day, but it was Miami that shot nearly 60% (59.3%) from the floor and 16-of-30 from beyond the arc.
The Heat used a 17-4 run to finally create some separation, which was led by eight of Robinson's 13 points in the third quarter, as the Celtics trailed 93-77 before Walker made it 93-79 to end the period.
Boos began to rain down from the 25% capacity crowd on fan appreciation night, with 9:02 left to play in the regular season finale and the Celtics were down 105-84 -- the largest deficit of the evening.
Boston went on a 10-4 spurt and despite the shooting 52.3% from the field and 18-of-37 (48.6%) from 3-point range, they couldn't defend the perimeter and or rebound; losing the battle of the glass 43-32 in the process.
Jimmy Butler had 13 points at the break, as the Celtics trailed 62-56, but the Heat All-Star did not return in the second half with an eye injury and it didn't matter much for Miami's balanced scoring; which continued to pour it on in the final 24 minutes.
Boston gave up a combined 260 points to the Heat in the two-game mini series, along with 58.3% shooting from the floor and 49.5% from deep to lose the season series 2-1.
The Celtics will head to Cleveland to face the Cavaliers (21-48) Wednesday on a second night of a back-to-back. Tip-off is at 8 PM EST.

The Celtics handed out 31 assists on 46 made baskets, while the Heat had 25 dimes on 48 shots. Miami's second unit outscored Boston's bench 50-20.
Joel Pavón
Follow @Joe1_CSP