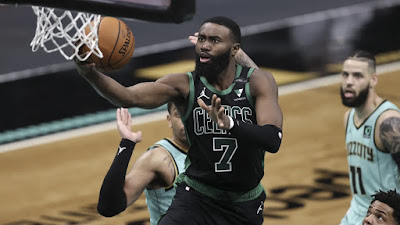 The Celtics once again proved to that early Sunday afternoon start times are just not their cup of tea after falling in a blowout to the shorthanded Charlotte Hornets 125-104 at the Spectrum Center.
Jaylen Brown (shoulder) and Kemba Walker (rest) returned to the starting lineup -- after sitting out against the Brooklyn Nets -- scoring 20 points a piece, as they shot a combined 15-of-37 from the floor and 5-of-16 from deep.
Jayson Tatum had a quiet 19 points on 6-of-16 shooting from the field and a team-high 11 rebounds, while Marcus Smart added 17 points in the loss that has the Celtics still sitting with the sixth best record in the East at 32-29.

"They didn't let us get into any rhythm and they made shots," Walker said of Boston being held to 38.6% shooting in his postgame presser.

Devonte Graham netted a game-high 24 points and handed out nine assists, P.J. Washington finished with 22 points and 12 rebounds. Old friend Terry Rozier recorded a double-double of 21 points and 11 assists, while Miles Bridges chipped in 20 points to help the Hornets (eighth) avenge a 30-point loss against the Celtics and pull within 1.5 games behind the sixth seed at 30-30.
Charlotte, playing without Gordon Hayward and LaMelo Ball, had a season-high 39 assists (33 from the starting five) on 47 made baskets. They also shot 50.5% overall, 21-of-43 from 3 (48.8%) and outscored the Celtics in the paint 46-36.

"They came out and smacked us," Brown said in his postgame comments. "We didn't match their energy and the Hornets played extremely well. We weren't as prepared as they were."

The Celtics trailed 26-12 to start the game, as the Hornets hit 6-of-7 from 3-point range and it was all downhill from there. Charlotte sank 12-of-18 from behind the arc and dished out 22 assists on 24 made shots in the first half to take a 63-52 advantage into the break.
Boston cut the double-digit deficit down to nine before Graham hit a 29-footer to extend the Hornets' lead back to 100-88 to end the third quarter.
Brad Stevens waived the white flag at the 3:25 mark in the final frame after a made 3 by Tatum and the with Celtics down 118-99, the starters were pulled -- losing their second straight.
The C's got a scare when Walker asked to sub out and then ran to the locker room midway though the second period after what appeared to be an injury to his left side, as he came to a jump stop while trying to close out on a corner 3 by Rozier. He would return later in the quarter to finish the half and the game, clocking in at 30 minutes.

"I felt some pain in my side, I can't really explain it," said Walker, who's the Hornets' all-time leading scorer.

The Celtics return to the TD Garden to kick-off their four-game homestand Tuesday against the Oklahoma City Thunder (20-40). Tip-off is at 7 PM EST.