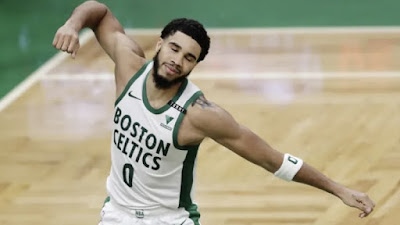 All-Star Jayson Tatum has experienced quite an interesting NBA season from his bout with COVID-19, a 60-point game and now having to fight for a playoff berth.
Despite a deep run to the Eastern Conference last fall, Tatum now finds himself having to shoulder a much bigger leadership role after Jaylen Brown had season-ending surgery this week to repair a torn ligament in his left wrist.
The Celtics currently have the seventh best record in the East at 35-35 and are heading into the league's new "Play-In Tournament" format to have a shot and make it to the postseason if they don't want their 2020-21 campaign to end just yet.
Boston is riding a four-game skid following a 102-94 loss to the Cavaliers Wednesday night, just another example of how inconsistent the Celtics have been all year long.
In a recent interview with ESPN's Adrian Wojnarowski, Tatum offered some insight on a frustrating season, as the Celtics' collective struggles can't be just pinpointed to only one thing.

"I think there's a lot that factors into that," Tatum said on the Woj Podcast of the team's inconsistencies, "especially with the extremely short offseason that a couple of the teams coming from the bubble that went deep into the playoffs and [had] a quick turnaround. And you can't really underestimate different guys' reactions to testing positive and how that affects them returning."

Still, the Celtics know they have to take responsibility for their up and down play this season given how other teams have performed through unusual circumstances.

"It's easy to say don't read too much into this season, but at the same time there are teams that are doing what they sought out to do,” said Tatum. "We're still just trying to figure it out."

With two games remaining in the regular season, the Celtics could be on the verge of being spectators during the playoff rather than participants if they can't "figure it out" within the next few days.
But Tatum, just as several around the league will tell you -- the recovery process from the coronavirus is not an easy one, as lingering effects have been an issue even months later.

"People still ask me that to this day, and the answer I give all the time is I do feel so much better than I guess the first game I came back from having it," Tatum said of COVID-19. "I can tell and notice that my breathing is much better than it was then, but I also tell people that it's hard to explain, it's hard to pinpoint, but I don't necessarily feel or breath the same that I did before I had COVID.”
"There is a difference in how my breathing is before I had the virus to now," Tatum added.

The 23-year old missed about 18 days after testing positive in January and it took "probably a little over a month or like a month and a half" to start to feel somewhat normal. In April, Tatum spoke about the use an inhaler before games after never having to need one prior to his COVID diagnoses.

"It was frightening at first," he said of his post-COVID return. "It was also frustrating, trying to come back and play and just feeling restricted. It's hard to play when you're out of breath, or short-winded. It's hard to play at an extremely high level like I know I can, so I think that was the toughest part just trying to figure out how long is this going to last. Am I ever going to feel back to 100 percent? Those were the thoughts that were going through my mind as I was playing, as I was getting ready for games. I was always thinking about it when I was getting ready to play."

While Tatum is clearly having the best season of his young career statistically, the Celtics forward credits playing in the postseason over the last three years as a positive impact when it comes to his development.

"Just that feeling and knowing how hard it is to win in the playoffs - I think that was a huge benefit to my career so far," Tatum said.

It's not a secret that Tatum grew up idolizing the late Kobe Bryant, going as far as saying the Lakers legend is the reason he even picked up a basketball as a kid. It also wasn't too long ago that the now Hall-of-Fame guard broke down some game tape of Tatum on one of ESPN's Detail, film study series and that happened to be just months before the two worked out in Los Angeles that summer of 2018.

"I must have watched that ten times before leaving the locker room," Tatum recalled, as he was in was in the middle of a deep playoff run to the Eastern Conference Finals his rookie year.

Tatum, a huge fan and follower of Bryant's "Mamba Mentality" motto, had clearly added long contested two's and fadeaways to his shot arsenal after spending time with Bryant prior to his second year as a pro, something many critiqued as the season went on.

"I couldn't care less what anybody said. That was the best day of my life," Tatum jokingly responded when asked about the reaction to his change of approach after training with Bryant.

As Tatum has played basketball pretty much without much of a break (other than the pause in the NBA season a year ago) since the summer of 2018, the All-Star forward has yet to make a decision on possibly playing in this summer's Olympic games.

"A chance to win a gold medal and represent your country on the world stage, at such a young age would mean the world."

However, Tatum also added: "I haven't had much rest because I played in the FIBA World Cup in 2019. I've kind of been going non-stop for two years."

Whether or not the Celtics have an abbreviated playoff run or even get passed the new play-in format remains to be seen, as Tatum continues to ascend putting up career-highs of 26.4 points, 7.3 rebounds and 4.3 assists in only his fourth year.